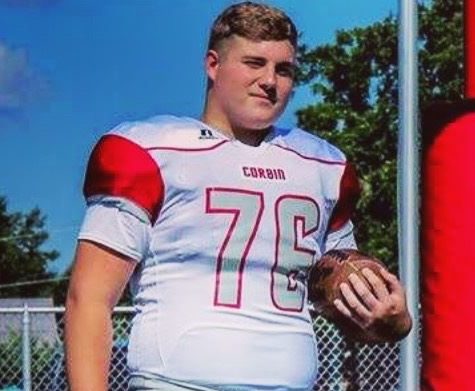 We here at KPGFootball do something Commonwealth-wide which has been, heretofore, unheard of in prep football coverage…we give some love to the big uglies upfront. Sure, when it is time to sign the letter of intent, all the sports writers, across the Commonwealth, come frolicking up like a bunch of star-struck teenagers trying to learn the lineman’s name. Until then, the sports page is filled with story after story of some skill player’s exploits. So and So threw five TDs, So and So ran for 150 yards from scrimmage, So and So caught the ball in the back of the end zone, you get the point. All these So and So‘s aren’t having the successes they are having without the efforts of five or six (TE in some schemes) guys, up front, who perpetually toil in obscurity with little to no fanfare, thanks, or journalistic attention. So, fellow sports writers, don’t come crying to me when Logan Smith, an Alabama fan, sits down to sign with the Crimson Tide and you feel woefully inadequate because you’ve never heard of him.

Logan Smith is a 6-3 inch 270 pound RT who is not only in the Class of 2021 and entering his sophomore season for one of class 3A’s most storied programs, but is also one of the strongest and most imposing members of the class. Logan bench presses 325 pounds and squats a cool 485. Does he have any explosion? Well he power cleans 250 pounds so I would say so, wouldn’t you? Logan is a former member ofTeam Kentucky, having made several appearances on its FBU team. Last season for the Redhounds, Logan was on the varsity roster for a team which played Boyle County for the 3A State Football Championship. Logan logged varsity time along the offensive front and some limited appearances on defensive where he recorded a couple of tackles from his DT position.

Corbin finished 13-2 and defeated perennial Tennessee Class 3A powerhouse Alcoa High School (Knoxville, Tennessee) at home last year 22-21 on August 26, 2017. Corbin, in a departure from what you see so many times in powerful programs throughout Kentucky, throws the football around the ball park more so than pounds the rock. Last year, the Redhounds passed for 2,852 yards while rushing for 1,965 yards. Having Cameron Sizemore graduate, taking with him his 2,695 yards passing and 32 passing TDs, won’t lend itself well to continued success, at least in the aerial offense. However, Corbin only lost 11 seniors to graduation, only 8 or so of those seniors started.

Returning in 2018, Corbin will see 24 players enter their senior season. Continued success, while never a certainty, is certainly most probable, Sizemore or no Sizemore. The Redhounds will still have Chase Estep (51 receptions, 631 yards receiving, 6 TDs caught; 113 rushing attempts, 710 yards, 8 TDs rushing), Christian Gosselin (37 catches, 705 yards receiving, 9 TD receptions), and Cameron Maguet  (25 receptions, 285 yards receiving, 4 TD receptions; 48 rushes from scrimmage, 366 yards rushing, 7 TDs) all of whom are more than competent skill position players. Regardless of what skills return, linemen the likes of Peyton Tirey, Nate Smith, and Mathew Masternak to go with Logan Smith will be around to insure whomever mans the skill slots will have time and opportunity to find success.

Logan Smith and young bigs like him are not only worthy of some press, but might be a name you would do well to commit to memory. This is Fletcher Long reporting for KPGFootball reminding all of you to PLAY THROUGH THE WHISTLE!