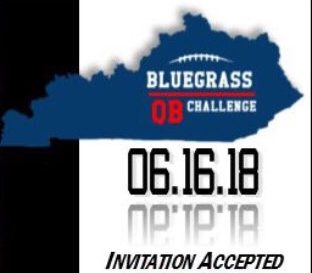 Former Louisville football quarterback Stefan LeFors is has started an event which has quickly become the most prestigious event to which to be invited for QBs all over the Commonwealth of Kentucky. The Bluegrass Quarterback Challenge is by invitation only with invites being extended to only the very best high school QBs in Kentucky. LeFors is the current head coach of Christian Academy of Louisville whom he led to the Class 2A Football State Championship in 2016 and which played and lost to State-Finalist, Mayfield last year in the State Semis. Two of the finest QBs in the Commonwealth of Kentucky who have both been invited to the event are Hopkinsville High School’s Javier Jay Bland and Caldwell County’s Jobby Jaggers. In this article, we will lay out for you exactly why each of these signal callers garnered an invite to this event which will occur on the campus of CAL. We will take up the Quarterbacks in alphabetical order…

Jay Bland is one of the very few, if not only, QB on the list of invitees who is a junior, as opposed to senior. Last year, as both a first year starter and sophomore, Bland threw for nearly 2,200 yards passing with 22 passing TDs in route to being selected to the AFI-KPG Sophomore All-State Football Team. Bland, a 2020 prospect, led his team to the Regional Finals and was a half away from outing the Regional opponent who went on to win it all in Class 4A (Franklin-Simpson). Jay did all of this in spite of having an offensive line in front of him without a single man having played even one varsity snap a year before and losing the preseason district player of the year in RB, JaTorion Dillard in a preseason scrimmage, leaving the Tigers without a credible ground game throughout the year. Bland is 6-0 tall and weighs 170 pounds with a 76 inch reach, making him play even taller. Bland deadlifts 500 pounds, squats 400, power-cleans 255, and hang-cleans 250. Jay Bland’s vertical was measured at 31 inches at the Rivals adizero combine in Nashville, Tennessee. Bland ran a 4.55 second, 40 yard dash at UTMartin’s camp this summer to go along with  a broad jump of 116 inches (9-8) he registered at the Future Stars Alumnae Combine in New Albany, Indiana. Also in New Albany, Bland registered a 4.3 second pro-agility shuttle (5-10-5). In an article on G1NBC-Christian County, another former University of Louisville and NFL QB, Chris Redman, had this to say about Jay Bland…Bland has a tremendous arm and great attitude. Things are looking up for Craig Clayton’s Hopkinsville team in Western, Kentucky. I predict a State Championship there soon! I really don’t care what QB from the Commonwealth is there at the Bluegrass Challenge, there will not be a better athlete in attendance than Jay Bland.

Joby Jaggers is a 180 pound, lighting quick, ankle-breaking, hiccup who moves the pocket well, attacks the line of scrimmage on the move, squares up and delivers a ball which hits the receivers on time, in stride, and gives them down-field, after the catch, opportunity. Sure the 6-0 Jaggers doesn’t have the stature you necessarily want at QB; but, then again, neither did his predecessor, Shane Burns, which didn’t stop him from throwing for over 6,200 yards and 71 TDs during Burns’ two years at the helm. Joby’s skill set fits well within the David Barnes’ spread offensive system and what Coach Barnes appears to want from his QB position. This would explain how the first year starter, a Class of 2019 prospect, was able to complete nearly 69% of his throws on the year (204 completions in 297 attempts), for 2,422 yards passing and 28 passing TDs. The Caldwell County Tigers, with Jaggers at the helm, was guided to an overall 10-3 record and a Regional Final appearance opposite E-Town High School which didn’t go as Tiger fans would have liked. There will not be a headier quarterback at the Bluegrass Challenge than Joby Jaggers. If there is one guy you, as a fan, would want to trot out onto the field with his team behind, with time for one drive  remaining and the team in desperate need of a score, that guy is Caldwell County‘s Joby Jaggers. In the end, isn’t that the finest compliment you can pay any QB?