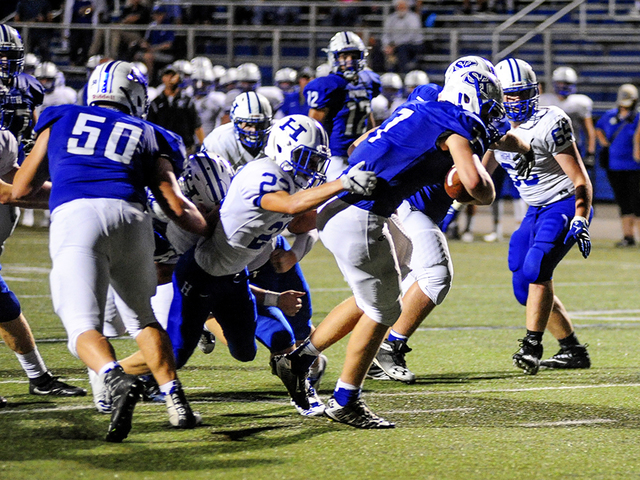 Simon Kenton, and I mean the real-life pioneer, and not the high school known as the Pioneers, was a pretty tough guy. He was made to travel a gauntlet of ritualistic Native American tortures as a captive of the Shawnee, or so the history books tell us. That gauntlet contained physical tests a normally constituted human being would have never been able to survive. I guess that is why they named a high school for him. Either that or his serving as a scout in 1778 on the famous George Rogers Clark expedition to capture Fort Sackville during the American Revolution. I will tell you another tough guy, who plays football with a bunch of other tough guys. We are talking about a modern-day Pioneer attending Simon Kentucky High School located on Madison Pike in Independence, Kentucky. For our purposes, our Pioneer is a 5-10, 170 pound, Class of 2020, RB named Austin Hammack.

Simon Kenton had a really good season last year as one of the best football teams in Kentucky’s largest and most difficult classifications (6A). The District 6 team, coached by Jeffrey Marksberry and staff, won 11 of its 13 contests before losing in the 2nd round to a Louisville Trinity team which, truthfully, no one in the Commonwealth of Kentucky appears able to give much of a contest. You would have to think that should Simon Kenton ever be able to make noise around the 6A classification, last year would have been a good year to do it. After all the Pioneers had a senior QB on hand named Matt Shearer. The 6-3, 210 pound QB who passed for 3,870 yards and 47 TDs during his two-year stint as QB-1 for the Pioneers spurned scholarship offers from Urbana University and Morehead State to sign late with Concord University. Shearer, over the course of the 2017 season, completed 165 of his 276 passing attempts for 2,532 yards and 33 passing TDs against a paltry 7 interceptions.

Now, with Shearer’s departure, and no proven replacement, the exact position in which Simon Kenton found itself two years ago when Shearer came and saved the day, it would appear the Pioneers will rely heavily on a ground game anchored by rising junior Austin Hammack. Hammack has a registered 40 yard dash time of 4.52 and, last year, gained 806 yards rushing from scrimmage in only 104 carries for an average of 7.75 yards per attempt. Hammack also pitched in 10 rushing TDs. In addition to his ground gains, Hammack also collected 8 receptions from out of the backfield for 89 yards and a TD receiving bring his points scored season total to 66 points. Hammack won’t have to do it all either as one of the best DL prospects in Northern Kentucky also returns in Class of 2019 JJ Courtney. Courtney registered 82 tackles a year ago, which for a player with his hand in the dirt is astounding. In addition, he recovered 2 fumbles and even intercepted a ball. While replacing Shearer is a tall order, these group of Pioneers will find the cupboard has been hardly left threadbare. The talent left on hand will make the gauntlet, this coming season, much more bearable than the gauntlet the real Simon Kenton had to travel while captive of the Shawnee, I can promise you that!