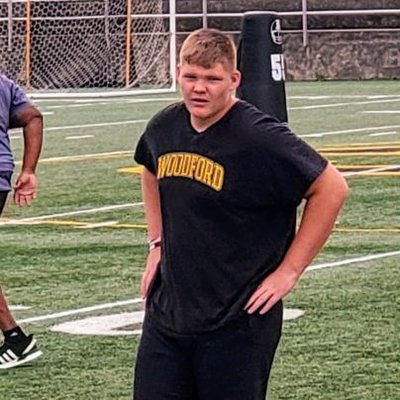 Offensive linemen are not like other players. Where a running back may be listening to “Hip-hop” or “Country” on game day to get himself “psyched-up,” an offensive lineman is just as likely to have classical music blaring through his ear phones to provide him a similar motivation. No where is that any more on display than at Woodford County High School with today’s feature.

No lineman in Kentucky embodies this any better than a certain 6-5, 290-pound ’23 offensive lineman named Tristan Cook. He is a true “Renaissance Man.”

Talk about “having it all,” this kid has great height, superior length, moves his feet well, locks on tightly and drives targets either deep into the second level of the defense or through the ground. He does all of this while still maintaining a 4.0 GPA.

Get this! He plays the Viola in the Chamber Orchestra. Offensive linemen are renown for being an erudite and eclectic bunch. With his frame and other attributes we would have to concede his killing the books and defensive linemen all while playing in an orchestra is the formula for stardom at the position.

This kid is a classic offensive lineman. We can’t rule out his getting defensive snaps as he matriculates through high school; but we like him upfront offensively at the next level.

Cook makes the rounds on the camp/combine circuit. He attended Will Muschamp’s OL/DL development camp at South Carolina last time they were able to host it.

While Muschamp is no longer at SC, we are quite sure his impressions of this young big remains in Columbia on a notepad around the coaches’ offices. Cook will still likely remain on the calling list no matter who’s coaching in Columbia. Some in-staters would be wise to pitch their hats in the ring.

Cook’s offseason camp/combine schedule this particular offseason will be key toward launching him toward the big-time offers he is capable of landing. He should be wedded to the weight room this offseason, adding bulk and muscle definition to his long, tall frame. As you can tell from photographs of him, he’s off to a solid start.

We have seen his weight reported anywhere from 280 to 290. The good news here is he looks thin while still carrying substantial bulk.

Generally, players who weigh 290 and look 255 are guys who have quite a bit of muscle density. This causes them to be heavier than they appear. That is a good thing.

Guys who look 290 and actually weigh 255; well that is not so good. Cook is one of the former, not the latter.

Woodford County is a program which plays football in Kentucky’s 5A-classification. They are also a team which improved in ’20 as the year went along, which speaks very well of the coaching.

The Yellow Jackets were 4-3 last season losing by 2-points in the playoffs, round two, at Madison Southern. Madison Southern had to bow out of the Regional title game against Covington Catholic owing to the KHSAA’s COVID-19 cancellation policy.

Here’s to hoping there will be no more need for such a policy in ’21. We have our fingers crossed and we are sure you do too.

The Yellow Jackets, with Cook positioned at RG over the seven games, ran the ball very effectively in ’20. Over the 7-games, the team rushed the ball from scrimmage 274-times, gaining 1,972-yards (7.2-yards per attempt). The Jackets averaged 281.7 yards per game in team rushing and 4-rushing TDs a night.

In edition to playing guard, this prospect reports experience at offensive center, a position where quality play is always in demand. We believe his home, over the next two years and perhaps in college, may end up being on the edge at one of the tackle posts. One reason for this belief is our doubt Cook is finished growing.

Either way, whether an interior guy or edge protector, this is a commonwealth football prospect which should be added to your radar. We are sure many college scouts agree with us.