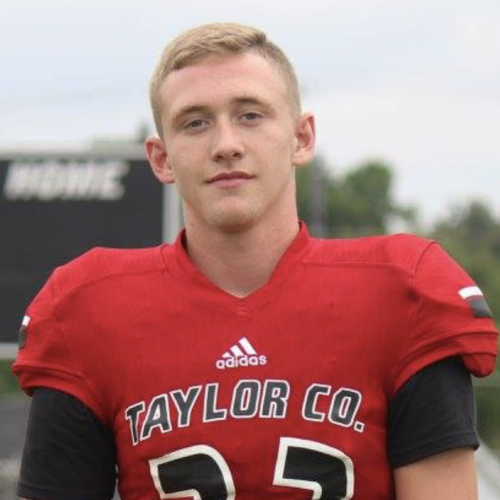 We’re plowing already plowed field here featuring another Taylor County, Kentucky star in Ben Vaughn. Seems like we have before been here. Remember Logan Parker and Campbellsville’s own, Arren Hash (April 1, 2017, Arren Hash, The Rifleman)? Sure you do. I wrote about Logan on June 13, 2017 in an article entitled Meet 2020 Top 100 Nationally Ranked Kentuckian, Logan Parker. Logan was prominently featured again on November 30, 2017, as a member of our AFI-KPG, Sophomore, All-State Football team, for his play at Taylor County along the defensive line this past season. Arren, in addition to the feature parenthetically above noted, was selected our only QB on the AFI-KPG, Freshman, All-State football team. Both Hash and Parker started, at their respective schools, during their freshman seasons. Both were immediately plugged-in to the lineup as Varsity players on the high school level. Well, it would appear Campbellsville, Kentucky has done it again, as the ripe, fruitful, football, grooming ground has another immediate impact, plug-in player for Taylor County. Ladies and Gentlemen, meet 2022’s Ben Vaughn from Campbellsville, Kentucky.

Ben is a 5-11, 180 pounder who has played in middle school TE (“H” or “Y” in the Spread), DE, OLB, and RB. We believe at Kentucky Prep Gridiron he has a tremendous future at the high school level at any of these positions depending on how he physically matures and can see him really turning into a big powerful running back in the mold of a Logan Parker, or even Austin Gough, who took over last year’s Tennessee-Kentucky game at the RB position in the 4th quarter for Team Kentucky Future Stars. Ben is an accomplished player being selected, already in middle school, to Team Kentucky FBU and to the Kentucky Future Stars team. Ben runs very well, gets north-south quickly without any negative steps, at LB exhibits the ability to both shed blockers and scrape down the line to make plays, is a sure tackler, and looks, on film anyway, to have excellent speed. Taylor County used him to make big offensive plays this year from both the backfield offensively and down the field in the vertical, deep, down-field pass game. He gained easy seperation from opposing defenders. When this kid hits a weight room, if he hasn’t already, it will be fun to see what he does on a football field, provided you aren’t the coach attempting to contain him.

We have started compiling our watch list for Kentucky’s 2022 Class both in expectation of the Kentucky-Tennessee Future Stars game which will be coming up this summer and for next years Freshman, All-State football team. We have our eye on Ben Vaughn and imagine he will feature prominently in our lists of Kentucky’s top 2022 prospects moving forward. If I were Ricco Hughes, Director of Kentucky Future Stars football, I would definitely have my eye on Taylor County’s Ben Vaughn. I know we sure do.

This is Fletcher Long reporting on behalf of Kentucky Prep Gridiron reminding you to PLAY THROUGH THE WHISTLE!