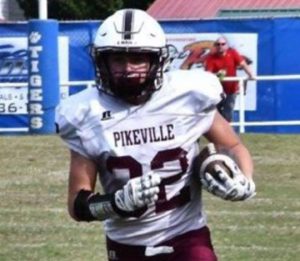 They have participated in 6 Kentucky Middle School Football Association (KYMSFA) playoffs, prior to the one in which they are now participating. They have won the Middle School State Football Championship in their division 4 times and advanced to the State Semifinals a fifth time and losing by only two points (24-22 to Lexington Catholic in 2016, Division 2). For the mathematically inclined, this would make them 5 for 6, or over 83%, in advancing, at least, as far as the Championship Weekend in Middle School Football playoffs. They have the ninth highest regarded prospect in Kentucky’s Class of 2023 in 6-2, 210 pound DL/OL Brayden Spears. The very mention of their mascot and school strikes fear into the hearts of opposing players and contributes to the nervous perspiration production of middle school coaching staffs. They are the Belfry Middle School Buccaneers, and they are in the Region 4, Division 3, Finals this Saturday against Pikeville Middle School. The game will be played on Pikeville’s campus, but these two teams, both hailing from Pike County, Kentucky, will be amply represented both on the field and in the stands. Belfry made this game by redeeming itself against the only team to beat them during the regular season inside Division 3 play, Paintsville Middle School. Belfry outlasted Paintsville in a 3 OT, marathon which ended with Belfry advancing owing to its being on the right end of a 36-30 final score. That game featured everything from cow-bells, to late hits, to grandstand Fisticuffs between opposing parents. Now that is truly getting one’s money’s worth from the $6.00 price of admission.

Awaiting Belfry is an opponent which isn’t, necessarily, chopped-liver, if you know what we mean. Like Belfry, Pikeville has lost just once this season inside the division. Like Belfry, Pikeville has a marquee player, highly regarded among Kentucky’s Class of 2023 prospects, in top-rated prospect (No. 1) Carson Wright. Unlike Spears, Wright brings a completely different skill set into the matchup, at least on the offensive side of the ball. Wright is a 5-11, 170 pound linebacker/running-back who has been described as a high school varsity player playing in a middle school game. What makes him so? Well, for one, how many middle schoolers have you either seen or heard of getting hand-timed at 4.52 seconds in the 40 yard dash, registering a hand timed 4.31 second pro-agility shuttle, running the L-cone drill in 7 seconds flat, while still able to bench press the middle school rep weight (115 pounds) 20 times? You haven’t seen very many because there haven’t been very many. In asking a middle school defender to come up and meet Wright in space, you are asking the young man to tackle a player, bigger than he (more than likely), whom is both way faster and quicker than he, and stronger than both the strongest lineman or front-seven player on the roster and he. That is asking quite a lot.

Now, we told you Pikeville has one loss, as does Belfry Middle. Belfry Middle avenged its regular season loss to Paintsville this past Saturday night by outlasting Paintsville 36-30 in 3 OTs. Pikeville gets an opportunity at redemption too. Its only loss was to Belfry. During the regular season matchup Belfry took a 16-0 lead into the half. Belfry would end up preserving a 22-16 victory when it was all said and done as Pikeville scored on two passes to the flat thrown to Carson Wright. Both times, Carson was able to get into the open field and run away from Belfry’s back-end. During the contest which occurred in the regular season, the bigger Belfry squad, behind Brayden Spears and his mates, were able to run straight at the Pikeville front, using its superior size up to drive the ball right down the field. Pikeville had a hard time stopping the Buccaneers from running straight at them but little trouble shutting down the edge game as Pikeville had superior speed.

For Belfry to get to Lexington and a date with Meece in the Semi-finals, they have to control the clock, run the ball right at the Panthers, and keep the Panther offense off the field thereby limiting its possessions. Good news Buccaneer fans, no team in the KYMSFA is set up for that strategy better than Belfry. For Pikeville to get to the State Semi-finals with an opportunity to play Meece, the Panthers have to shut down the run between the tackles defensively and get the ball into Wright’s hands, in space, like it did in the second half of the regular season meeting, where Wright can use his speed, quickness, and explosion to run away from the Buccaneer back-end. Good news Panther fans, as for shutting down the run between the tackles, you have the best linebacker in Kentucky’s class of 2023 who is probably unwilling to sit idly by and let Belfry cram it down the Panthers’ throat a second time. Good news on the Panther offensive front too; Carson Wright is way faster, quicker, and more explosive than anything anyone else can put on the field to stop him, even this week-end with Belfry. The ball has to get to him with time enough for him to get to do something with it; but, assuming that happens, Carson can sort of take it from there.

The Region 4 Championship Game, which will be played at Pikeville High School this Saturday, will be a war just like Belfry’s game with Paintsville turned out to be. In the end, it will come down to whom can do what they have to do to meet with success and just whom can get in the other’s way. In a season of redemption, we believe it may be the Panthers, this time, whom will be redeemed. Sorry Buccaneers, KPGFootball is taking the Panthers to win this game, 20-16.