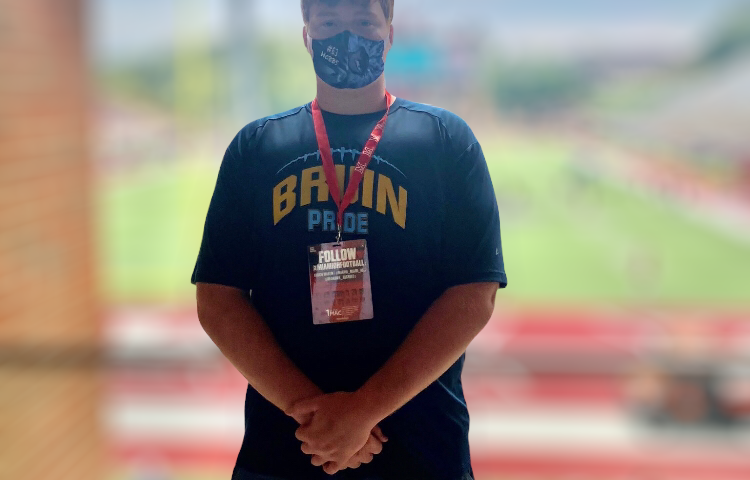 Central Hardin is having quite a year. The Bruins are 7-2 and a one point defeat to Barren County on the road on October 1 from being 8-1 and right in the title hunt in the 6A classification.

The Bruins are 2-1 in District 2, 5-1 in their classification, and, aside from a slip up against Henderson County (a District 1 team), the Bruins are playing inspired football. They have even beaten cross town rival North Hardin and with Barren County sitting at 1-2 in the District, the Bruins look like home field for the first two rounds.

Why the turn around? Is it just the outstanding coaching from Tim Mattingly and staff? That has a lot to do with it.

Another thing “helping out” if you will is the outstanding player development of some key and integral pieces to the roster puzzle. One of those is Class of ’23 superstar DT, Adam Hobbs.

Hobbs is a framed out kid. His 6-4, 280-pound physique has caught the attention (and recruiting favors) of programs like the University of Cincinnati, Miami of Ohio, and WKU just to name three. If his frame doesn’t impress you, the on-field production should.

So far, for the 7-2 Bruins, Hobbs is killing it on the defensive side of the line of scrimmage. In his nine (9) games in ’21, the big guy has 42-tackles from DT. Thirteen (13) of his tackles have come from behind the line. Nine (9) of his tackles were QB-sacks.

Hobbs has both forced a fumble and recovered one. Both the forced and recovered fumbles were on Friday night against North Hardin. Hobbs also had a TFL and two (2) QB-sacks against a team against which Central Hardin hasn’t been experiencing much success since Hobbs joined the Bruins’ varsity roster.

Basically, this Hobbs cat ranks among the very finest prospects across Kentucky at the defensive line position in the class of ’23. He’s a big time, FBS-type, both in frame and on-field production.

Hobbs is leading his Central Hardin Bruins to the “Promised Land.” Opposing blockers are parting before his untenable upfield onslaught like the parting of the Red Sea.