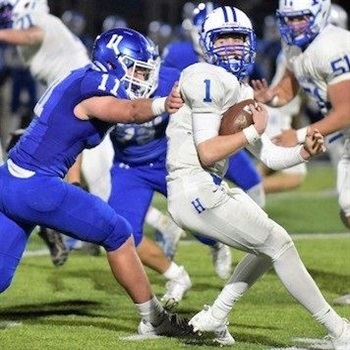 We are sure you have before heard said, “We never know who’s showing up” regarding either a player or team. We have too.

With Aiden Jones this is doubly true, though not for the reason you would think. NCSA (Next College Student Athlete) has Aiden Jones listed as a 16-year-old sophomore who is 6-0 tall and weighs 187-pounds. MaxPreps has him listed as 6-6, 286-pounds.

Now that is quite a spread, in the size department. We aren’t sure which one is right.

If you look at the picture we took from off his Hudl page, the one above his highlights we took from the same place, if Jones is 6-6, Covington Catholic may well be the tallest team in Kentucky High School football history. We can’t altogether exclude this possibility. Covington Catholic has quite a roster year-in and year-out, which is why they are perpetually in the 5A title hunt.

However, looking at the same picture, Jones clearly looks much thicker than the 187-pounds NCSA has listed. However, Jones certainly appears well slimmer than a player weighing 286, as MaxPreps reports, unless Jones really is 6-6, which brings us right back to the point from where our trip initially began.

All of that mess aside, he has some height to him. One of his primary positions on offense is TE. We are well aware of the type TE’s (Michael Mayer, Notre Dame) that school has before produced.

Jones’ defensive position is MLB, where the former TE-star also played defensively. Jones’ production over his sophomore season bears out his ability to play LB, either outside or in the middle, more than just effectively.

At any height or weight, Jones, as a sophomore in high school, was second on the team in tackles (54). Jones was toward the top in TFLs (4). Jones had a QB-sack and recovered a fumble in 11-games at a program where players his age generally are relegated to the junior varsity.

What we are trying to tell you is simply this. If he is 6-6, 286-pounds, he will be one of the most recruited prospects in Kentucky’s ’23 class and maybe in the Midwest Region, just off those measurements alone. If he isn’t quite framed out as MaxPreps believes, his level of production from a sophomore playing the schedule Covington Catholic regularly plays, still makes him positionally one of Kentucky’s very finest in his graduating class of prospects.

Like we said at the beginning, the Colonels’ opponents never know who’s showing up…is it the 6-0, 187-pound sophomore budding with potential, ability, hoping to gain some size and length? Or, is the 6-6, 286-pound framed out the wha-zoo TE/LB Michael Mayer clone showing up insuring he will be the next Colonel headed off to the FBS, Power-5?

We don’t know. However, both of the kids can flat play football regardless of whom is showing. That’s part of what makes attempting to cover this particular subject commonwealth-wide so challenging and so much fun.