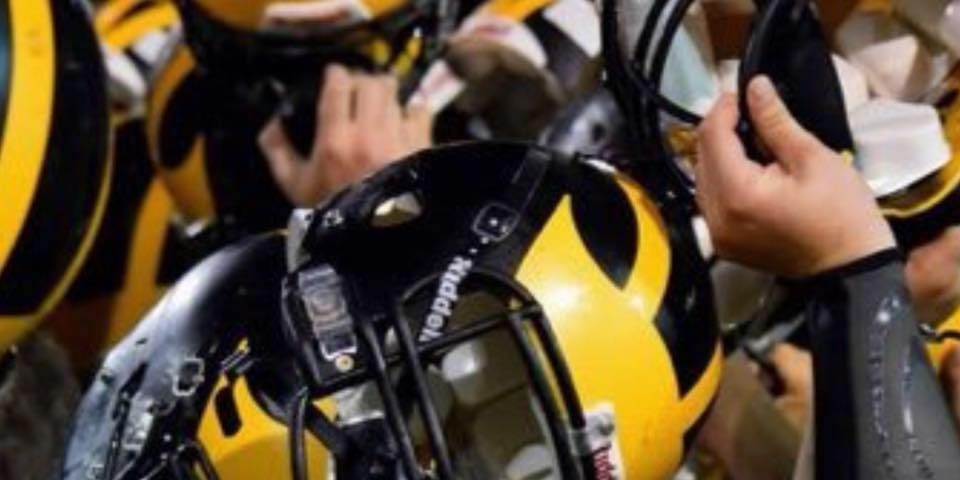 The stellar athlete plays Catcher, Pitcher, and First-Base in baseball while leading his football team from QB and in the defensive backfield!

The Bellevue High School Tigers, under Coach Clifford “Ce Ce” Wood, had a really bad year in 2019. They did split their two games with Dayton, one of which is called the “Battle for the Paddle.” Other than that, the lone win against Gallatin County (who only won once in 2019) was the only thing which stood between the Tigers and getting blanked.

The Tigers were considerably better in 2018, going 5-6 that year. That was John McMillen’s last season at the helm, so Wood’s inaugural campaign didn’t go like he would have liked.

However, there is plenty of reason to look forward to 2020. One of the more profound reasons is the return of the QB/DB, Aaron Atkins, who is one of the better athletes in the class of 2021, Kentucky-wide, and certainly in the 1A classification.

Atkins, pictured to the right in his baseball uniform, is a star for the varsity baseball team. Much like the versatility he displays on the gridiron, Atkins mans three different slots on the diamond. Atkins plays catcher, first-base, and pitches.

On the football field, Atkins, who is 6-2 and weighs 170-pounds, played QB on offense. He completed 83 of his 196-passing attempts for 1,495-yards through the air with 16-passing TDs offset by his 11-thrown interceptions.

He was the team’s second leading rusher. He gained 272-yards rushing, on 101 carries with 3-rushing TDs.

Defensively, where the Tigers don’t log their statistics on the KHSAA website maintained for those purposes, it is harder to tell what, if any, impact he had on that side of the football. We can tell you the defense’s performance was one about which no one would “write home” in 2019, but we’ll get into that a little later.

One telling statistic is the team had only 2-pick-sixes on the season and one of those belonged to Atkins. Atkins picked off a pass and returned it 64-yards for a score.

That means Atkins was instrumental in scoring nearly 56% (.55813953) of the team’s total scoring output on the year. Not a ton of players can say that in any year, for any team.

For those of you who regularly read us, you know we are big on numbers and analyzing statistics. Obviously, a team which scores 215-points in 11-games can’t surrender 405 or permit opponents to rush for 2,652-yards while only rushing for 900 itself.

The passing versus yards allowed passing quotient looked far better. The Tigers passed for 1,623-yards while allowing only 1,223. Permitting 111.2-yards passing a night isn’t terrible. It isn’t great, but it is a number with which Coach Wood can live.

Needless to say the Tigers have some work to do to get in the Class 1A, 4th-District picture. However, they have a splendid athlete returning at the controls of the offense who also quarterbacks the defensive “third-level” and it should be noted those two units were the team’s most productive units in 2019.

Kids change tremendously from year to year. The “Aaron Atkins” the 4th-District saw in 2019 is likely not to resemble the one the district will see this coming Fall. As the district struggled against Atkins in 2019, that is very good news for Coach Wood’s Tiger varsity squad.

Epilogue: KPGFootball was contacted after this story appeared by the Facebook page of Bellevue High School Football. They told us Atkins had transferred to Newport Central Catholic High School where he would play his senior year. It is the policy of KPGFootball to NOT report on transfers until the transfer has enrolled, sought, and then obtained immediate eligibility under Bylaw 6 of the Rules and Regulations of the KHSAA. H.B. Lyon.