This will probably be the easiest article this publication has ever undertaken. The Notre Dame football commitment is rated by many services to be Kentucky’s 2nd highest regarded recruit in the 2019 class and that is total BS. He has been rated by two major recruiting services, Rivals and 247Sports, as a 4 star recruit and that is total BS too. Make no mistake about it, Jacob Lacey is a 5 star recruit (Tom Lemming called him a four plus) and he is the most coveted recruit in the Bluegrass, whether he has been ranked behind Trinity‘s fantastic week-side DE, Stephen Herron Jr. from Louisville or not. You don’t get DTs like Lacey with any degree of regularity. As a high school player he is a once in a coaching career prospect. As a college prospect, he’s the best interior defensive lineman Notre Dame has had committed to it in a while.

Let me be the first to caution you about stars. There are times when, nationally, the talent isn’t what it is in other years. Even nationally, the talent cycles both up and down as some years’ five stars would have been 3 stars five years prior and, of course, vice versa. This is why we see five star prospects, from time to time, bust in college. There are other reasons too, outside of the quality of the national talent pool, but you know what I mean. Jacob Lacey is, by Rivals‘ estimation, a 5.8 rated 4 star. While we believe that to be too low, as does Tom Lemming with CBSSports, according to an article on NDInsider, we also believe Lacey is, at the very least, a four star this year, five years ago, or five years from now, whether the national talent pool has cycled up or down, it just doesn’t matter. What makes this particular prospect so good? Is it his being 6-2 and weighing 295 pounds presently with the frame to play around 320 pounds? Is it his incredibly fast first and second steps, or what people refer to as get-off? Is it his ability to use well-refined hand techniques? What is it exactly? Let’s ask someone who has faced him just this past season. 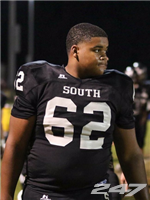 We caught up to a player who was tasked with attempting to keep Lacey out of his team’s backfield last season and he agreed to speak with us, about Lacey, on the condition of his remaining anonymous. We, at KPGFootball, agreed to this condition as it was his candor we sought and felt he would be more free to comment if his identity was protected. He told us…What makes Lacey so dominate is his speed/finesse game. He’s a technician and moves like poetry, with a speed and quickness you aren’t expecting from someone his size. He can be overpowering at times, though he isn’t overpowering every down. When he is playing full bore, he is nearly unblock-able. You don’t get the sense you’re just getting bowled over, but you blink, and he’s by you. If you have never before faced him, you aren’t really prepared for it. Lacey is a guy with tremendous length who uses the blocker’s momentum against him. If the blocker gets too aggressive, he finds himself clubbed, swam, or ripped and left wondering what in the world possessed him to play so far out over the end of his toes. It really takes a fundamentally perfect game to cover him up or the hope he just might be tired. That certainly sounds like a five star prospect to us…but what do we know?