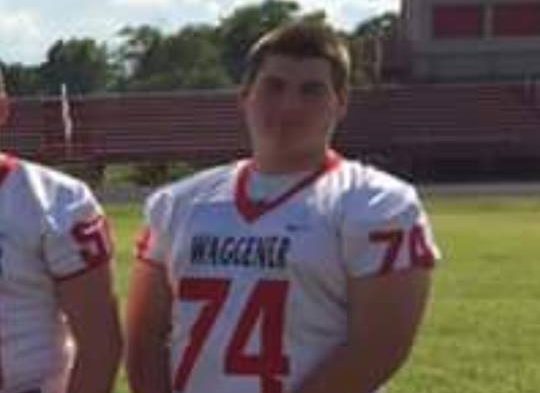 Okay, this is the first part of our series on players who will start their freshman year. The players we will feature in this series are players who were playing Middle School football a few scant months ago and who are slated to start, either initially, or sometime during their freshman campaigns for their High School Varsity football teams. Many of these players participated in the Kentucky Future Stars game during their Middle School careers and it is almost frightening how accurately Ricco Hughes is able to project which players he selects will develop into High School football stars. For some of his protégés, the transformation is almost immediate.

We will begin with mammoth RT for Louisville Waggener, John Mudd. John is 6’1″ 280 RT who has the frame and length to add both size and bulk as he continues in the Waggener strength & conditioning program. John has quick feet and is able to both drive block well and kick back and intersect the upfield, outside speed rush, while having the strength to shut it down once there. John played on Kentucky’s Future Stars team which defeated Tennessee in Clarksville in the 8th grade game in Clarksville, Tennessee the first part of June. John is listed, this instant, as first team at his RT position for the HS Varsity team at Louisville Waggener according to sources consulted by Kentucky Prep Gridiron.

The next player in our series is EJ Austin. EJ played QB both in Middle School at HMS and for Team Kentucky in the Tennessee/Kentucky game and moved the team effectively while he was in the game. EJ suffered what the medical staff feared was a concussion but which turned out not to be. that initial impression by the medial staff during the game resulted in LaKunta Farmer shelving the young prospect for most of the second half. EJ has really shone during 7 on 7 and now that the pad are on and is on the depth chart as the starter for Defensive Coordinator, Dustin Lopez, at Safety/Corner.

Austin has exhibit a toughness coming up and meeting running plays and the speed to cover both deep and intermediate throws. EJ, especially for a freshman who has just recently turned 14, has shown an ability to get over the top of the vertical routes and close down the underneath stuff. Most observers have, perhaps, been most impressed with his swag as no one will ever accuse him of lacking confidence.

Next on the list is a lengthy, edge target who sources close to Kentucky Prep Gridiron indicate will start either initially or sometime during the year at duPont Manuel

High School in Louisville, Kentucky. Elijah Blakey is a 6’2″ 165 pound, polished edge threat whobenefits from being the son of a coach. His Dad, Melvin Blakey, took Eli and his teammates to the Division I, State Middle School Championship at Newburg Middle School and Blakey trained offseason with his dad at B&B Precision Training. It’s a good thing he did, they play a little football at duPont Manuel, unless you haven’t heard. WR is a very difficult position to crack on the HS Varsity as a freshman owing to the speed of the game, but this long-strider is someone who doesn’t look as though he is running very fast but who always seems to gain separation. Blakey is a guy who one needs to whom to pay special attention going forward as he has the length, hands, speed and frame to really develop into something special as he progresses.

Well, prep gridiron fans, that is a taste of the type of players we will cover in this series so stay tuned as we feature the freshmen who HS coaches will be plugging in to their starting line-ups this Fall.