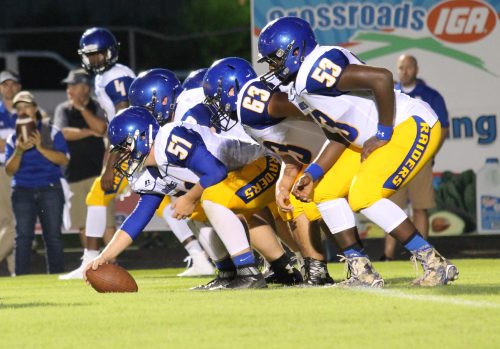 I can tell you one thing, there is no one around who will ever say Jeff Griffith isn’t doing a great job at Warren East High School. The Class 4A, district 2, Raiders were a tough out in last year’s KHSAA playoffs. On top of that, the Raiders finished the regular season 6-4, and dropped consecutive games to Glasgow and Monroe County by margins of 16-14 and 15-14 on consecutive outings. We’re talking just a few points away from 8-2 regular season. In true Coach Griffith style, the Raiders play was gritty, hard-hitting, physical, and tough. Warren East drew a home game in the first round against the 3rd place, district 1 finisher, Hopkinsville, and lost 21-7 in a game closer than the final score would indicate. Had Warren East won at home, they would have gotten to go to Logan County, instead of Hopkinsville making the trip, and who knows? I mean, Hopkinsville beat Logan, on the road in round 2, 43-7. Maybe if the Raiders had advanced to the round 2 game, the Raiders go all the way to the Regional Final. No way to know for sure.

One reason the Raiders were so successful was a pound the ground, physical, run-game which saw two players nearly both reach the 1,000 yard rushing plateau. Senior Trevor Naftel gained 855 yards on 143 carries (nearly 6 yards a carry) with 7 rushing TDs last season but exhausted his eligibility. However, Coach Griffith will see Thomas Maxey return for another go around and the 2019 prospect should benefit from being the emphasis of the ground attack. Last season, Maxey gained 906 yards rushing in 143 attempts (6.34 yards per carry) with 6 rushing TDs. Maxey also caught 13 passes for another 328 yards receiving with 2 TD receptions. The Raiders also return a gritty QB in Nolan Ford who was pressed into action a season ago as a freshman. Ford completed 47 of his 100 passing attempts for 649 yards passing and 4 TDs while rushing for 113 yards, spaced out over 38 carries, with a rushing TD.

Maxey is listed as 6-0 and weighs 160 or so pounds and has a registered 4o yard dash time of 4.5 seconds. Maxey reps the high school rep weight of 185 pounds, 3 times, squats 350 pounds, and power cleans a cool 195. Having a running back on hand as accomplished, experienced, and productive as Thomas Maxey is even more important where his running mate has graduated (Trevor Naftel), the QB is going to be a sophomore (Nolan Ford), and the top receiving threat, the only one on the team more productive catching the ball than Maxey a year ago, was Caleb Huskey who has taken his 37 catches for 827 receiving yards (22.4 yards a reception on average) and 9 TD receptions to college. Still, with Ford, Matt Mellancamp, and, of course, Maxey returning, KPGFootball still sees the Raider football program as being on the rise. With a head coach like Griffith, we expect it will stay that way.