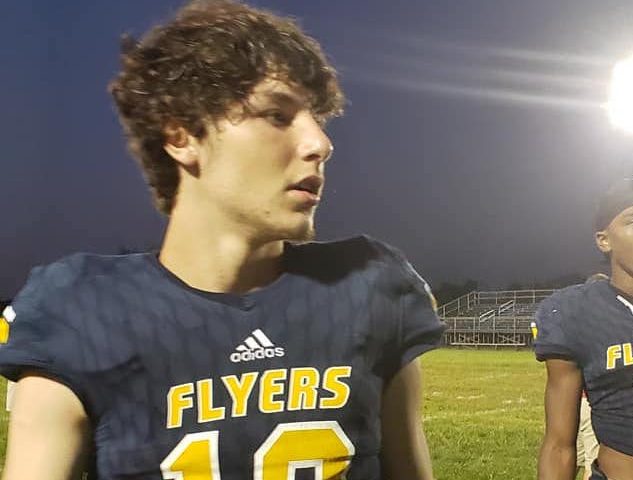 Okay, we agree with you Boyle County is really good. What with the D-1 talent dotting the roster, one of Kentucky’s very best head football coaches, and a storied tradition accustomed to winning championships and making deep playoff runs, there can’t be legitimate talk concerning a team’s likelihood of winning it all which doesn’t include Boyle County’s Rebels. Their .748 RPI, through 7 games, Class 4A’s highest number, doesn’t hurt their prospects either.

Shouldn’t overlook the classification’s second highest RPI, old number .712. You know the team, the one with the RPI between Johnson Central’s .700 and Boyle County’s .748. One of three teams in the classification to have not yet lost a game. Yep, we’re talking about the Flyers from Franklin County High School.

What makes Franklin County so good you ask? Well, the play of the Class of 2021 QB, Nick Broyles isn’t hurting a darn thing.

Broyles is listed at 6-1, 180-pounds. He is Franklin County’s leading rusher if the season were to end today. Right now Broyles has gained 531-rushing yards in 61 rushing attempts with 6 TDs scored on the ground. What he has done passing the football is even more impressive.

There can be little to no question, Franklin County is legitimately in the State Championship Title hunt. There can be even less question they are in the chase owing to the extraordinary play from its junior signal caller.

Nick Broyles has shown, all season, he is a force with whom to be reckoned among Class of 2021 QBs. He has also shown no legitimate “title-talk,” in the 4A classification, can be had omitting the “Flyers” from the conversation. The same is true of any talk about which QBs should be considered, come year’s end, for All-State selection.

If you enjoyed this article and wish to gain full-access to the site, thensubscribe monthly to Kentucky Prep Gridironby following the prompts!