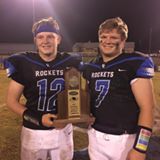 Probably the most famous set of brothers in literary history may be Jakob Ludwig Karl Grimm and his brother Wilhelm Karl Grimm, who together have been know as The Brothers Grimm. Both the Brothers Grimm were giants in the field of Germanic philology (the study of the structure, historical development, and relationships of a language or languages), though that is not how they are best remembered. The general reading public would better know their work as Children’s and Household Tales (in German, Kinder- und Hausmärchen) or the often inaccurately translated…Grimm’s Fairy Tales. You don’t believe yourself familiar with Grimm’s Fairy Tales? Sure you are! Hansel and Gretel, Rapunzel, Cinderella, Little Red Riding Hood, and Sleeping Beauty are all attributed to the Brother’s Grimm. Know what is attributed to the Brother’s Boone? How about outstanding Kentucky high school football play. Well, that is what the folks in Marion, Kentucky would tell you anyway.

Hunter Boone, a class of 2019 prospect, is a QB whose listed defensive position is MLB. Hunter is built more like a MLB than what is a conventional build for a QB, if we are being totally honest. However, Hunter’s play, last year, is surely indicative of a highly skilled signal-caller. Hunter, who along with his brother Tyler, is also on the basketball team, which KPGFootball feels says something about Hunter’s conditioning, feet, agility, and overall athleticism, completed 171 of his 298 passing attempts for 2,603 yards passing and 32 passing TDs. Now Boone suffered 16 interceptions, which seems like a lot, but a 2:1 TD to Interception ratio is above average and a ratio with which most high school coaches would be pleased. Besides that, have you ever heard the saying nothing ventured, nothing gained? Should we really be surprised when a high school quarterback, throwing the football nearly 300 times in a year, and who also throws 32 TD passes, throws it to the wrong guys occasionally? No. Getting Hunter back for 2018, and with Devon Nesbitt and Ethan Dossett both returning for their seniors years too, should put Crittenden County on firm footing to go, potentially, even farther than the Regional Championship game.

Now Tyler Boone is a 2021 kid who, very well, could have made our Freshman All-State Football team for his play last season. He had that kind of year, over an abbreviated 9 game season. Linebacker was a very tough position to make the All-State team, last year, as the 2021 talent pool for linebackers, in Kentucky, is particularly deep. This particular LB tallied 99 tackles and two interceptions in the 9 varsity games in which he played. A full 58 of his tackles were of the solo variety. Now if you look at whom did make the team in the Class of 2021, Justice Thompson (120 tackles, MaxPreps Freshman All-American, first team), Austin Gough (92 tackles, nominated for MaxPreps, freshman All-American team), Zach Yates (68 total stops, 40 solo tackles) and Preston Spurlock (123 solo tackles, 37 behind the line), you can see Tyler’s numbers measure up really well. On offense, Tyler plays WR (which means he can run) and, last year, caught 7 passes for 58 yards and a TD. While Tyler is a kid we may have missed on for the Freshman All-State Football team in 2017, he is a kid we are eye-balling for the Sophomore squad, should the play he exhibited in 2017 continue into the 2018 season.

Based on our independent research, it certainly appears there are some really talented footballers in Marion, Kentucky and it equally appears the Crittenden County Rockets are well positioned to make some noise in the 1A classification in Kentucky High School football. One thing is for sure, it won’t take a fairy tale to get the Rockets deep into this next season’s playoff bracket; but, should it, the Brothers Boone may be uniquely qualified to either write or tell it.