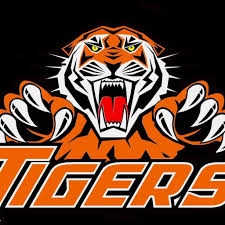 Well, KPGFootball traveled to Murfreesboro, Tennessee yesterday to watch the Hopkinsville High School Tigers participate in the biggest (and most prestigious) 7 on 7 tournament in middle Tennessee. It was held at one of the storied programs in the area, Riverdale High School.

There were 26 teams there including Page, Smyrna, Marshall County (TN), Lebanon, Waverly, Blackman, Centennial,  Shelbyville, Clarksville NE, Clarksville High, and Gallatin (Big G) just to name a few. The field represented the Haves in middle Tennessee, high school football and was littered by both State Football Champions and contenders.

On the day, Hopkinsville beat the following football teams together with their 2017 season records…Clarksville NE (7-4), Waverly (10-2), Gallatin (7-4), Page High School 2Xs (8-4), and Centennial (4-7). For those wondering, the combined 2017 records of the six opponents HHS bested, on the day, was 44-25. Hopkinsville tied Marshall County (TN) in its first game of morning pool play and then lost to them in the Semi-finals in OT. Marshall County has been to the Class 4A, State semifinals three straight years going 34-8 over that period of time.

In an event where the Tigers would leave 6-2-1, the combined record of Hoptown’s opponents it faced was 69-39 in 2017. We wanted to provide a little context to frame up an accurate picture of what the Tigers achieved, as a football team, in Murfreesboro, Tennessee yesterday so you, the reader, would have an appropriate appreciation of it.

Now, after telling you all of the above, KPGFootball would like to tell you this…don’t expect the Tigers who took the field and wore the Orange and Black in 2017 to look, in any way, similar to what will take the field in 2018. To say the Tigers are a light-year ahead of where they were this time last year is almost insulting to the magnitude of the measurement light-year.

I traveled with the Tigers, last summer, to Nolensville, Tennessee where the Tigers won once, against the worst team in the field, and pretty much got embarrassed the rest of the day. That team, before it would open in 2017, would lose key performers who had played for that edition of the Tigers Sevens’ team. The Tigers performance yesterday, in making the final four of a very loaded, 26 team field, shouldn’t be discounted. KPGFootball would like to give you some more specifics of some noteworthy individual performances from yesterday.

JaTorian Dillard was outstanding as well. You know, the best thing Dillard does is carry the football. When last healthy, Dillard averaged 7.19 yards a carry over the course of the 2016 football season with 13 rushing TDs in a completely under-utilized role. Obviously, there are no hand-offs in 7 on 7 football which deprives running-backs like Dillard at Hoptown, and Fred Orr at Clarksville Northeast, the opportunity to take over such an event. Dillard is so effective working the middle of the field in the throw-game, and catching passes out of the backfield, that he still finds a way to dominate. Yesterday really demonstrated how much the Tigers were hurt, last season, when he went down for the year in a preseason scrimmage against Owensboro Senior. With him healthy, the offense has a chance to be really special.

Jaime Cooper-Roman is really good. He played at outside linebacker for the defense and had several key pass deflections and even an interception or two using his ball skills, superior length, and spacial quickness. He went down early last season and was the defense’s best player at the time. He looks to be nearly 100% and I only say, nearly, because he still wears a brace. He was really something yesterday for the defense. There were other performers worthy of mention, but these three really stood out from where KPGFootball was standing. Regardless, this Hoptown teams looks like it can really perform at a level not seen around the Tiger Football program since the Clayton prowling the sidelines was quite a bit younger than the one whom prowls them presently.