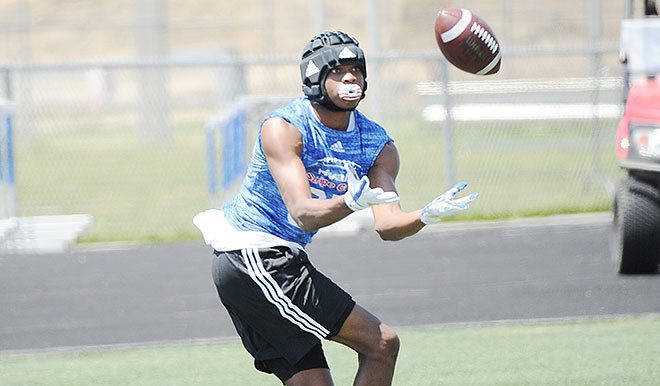 Louisville Doss is a Business and Information Technology themed school according to Wikipedia.org. The School has the first and only student-run credit union branch in Jefferson County. Among the different available majors, is banking and financial services. Frankly this appears entirely appropriate, as not only is Terez Tranor money in the bank for his Dragon teammates, he may need to be well versed in banking and financial services if his development on the football field continues to

travel along its present meteorically ascending path. In addition to being a top institution of learning in the Louisville metropolitan area, Doss also appears to be quite a repository of athletic talent. Oh well, it is the ‘Ville!

Kentucky Prep Gridiron believes 2018 WR/CB Terez Tranor is easily in the top 5 or so prospects in the Commonwealth of Kentucky’s rising senior class. Tranor is a lengthy 6’3″ prospect who has been hand timed at 4.56 in the 40 yard dash and weighs 183 pounds. Tranor plays all over the field for Doss as last year he threw, caught, and ran the ball from scrimmage on offense and played any of the back four positions on Defense. 247Sports.com has Tranor as the 6th rated prospect in his class in the Commonwealth of Kentucky and it has been reported Tranor has as many as 10 offers presently entering his Senior year.

From what I have seen, most schools interest in Tranor has been at WR as schools never get tired of length and height with good speed split wide and challenging defenses deep. I have talked with some college evaluators who believe he has the type of frame on which weight can be added and his future at the next level may be at TE. Still, others like what he brings to the back four on defense. Watching Terez’s film it is strikingly the similar to Cory Trice, an in-State prospect in the 2018 Class who shares many skill characteristics with Terez. Both players have the speed to get on top of vertical routes, the length and change of direction to close on over the middle stuff, and the attitude and toughness to come up and meet running plays with a great deal of hostility.

For receiver prospects out there, please go watch Tranor’s Hudl film and notice he thought to include film of his blocking down field on runs from Scrimmage. One’s film is critically important now a days in assisting college coaches’ evaluation of prospects. Coaches just aren’t going to make everyone’s game on Friday night, just aren’t.

When putting your film together remember, evaluators want to see receivers do more than catch the ball. It’s Division I college football son, everybody on that level both should and will have good hands. They want to see you do the little things, like run disciplined routes hard even when the ball isn’t coming to you, cracking down and folding linebackers when called on and engaging and maintaining good contact with corners on whom you’re called to block in the run game. You know, the little things which make one a complete player and not just a pass catcher. Receivers are expected to play a football game and not just the 5 or so times the ball may be coming their way.

Kudos from KPG to Terez Tranor on recognizing, in putting together his highlight film, that it needed to showcase more than his just catching a football or breaking up passes. What it shows, ballers, is his willingness to help his team however he’s called upon to do it, even if he is required to…PLAY THROUGH THE WHISTLE!