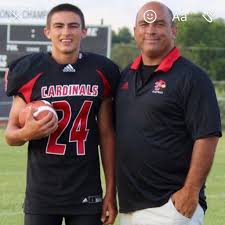 Well, one really has to wonder how in the world we missed on this kid. I mean he has been around for years. He started at RB for the 8th grade football team when only a 6th grader and had a video feature on KySports.TV. Well, we aren’t perfect, that’s how we missed him. We missed him when we published our series on Plug-In Players, we missed him when we selected Freshman, All-State running backs for the AFI-KPG All-State Freshman Football Team. Now, taking nothing away from either Ethan Mills or Brandt Babin (link: https://kentuckyprepgridiron.com/the-all-state-running-backs/) both of whom were no-doubters in the minds of our selection committee, one would have to think we could have found a place for a Freshman RB who gained 1004 yards rushing this season, in 11 games, on 132 carries, with 18 TDs, for a team which finished the year 7-4. That is, after all, over 7.6 yards a carry, a smidge over 92 yards per game played, and a TD mark of 1.64 per game. I mean, we certainly found Arren Hash for the Freshman QB slot, and the two of them live in the same county.

So, how did we do it? How did we miss this kid? Well, if you will recall, I never maintained the AFI-KPG All-State Freshman or Sophomore Football Teams honored every deserving player, just that every player honored was deserving. Regrettably, Wes Oliver isn’t the only player who should have been All-State and wasn’t, as the same could be said about Trace Grenier from Owensboro High School. If you will recall, in an article published December 3, 2017, I related that…Several of us believe we missed one here, but, then again, that always happens in any All-Star selection process. It isn’t perfect, far from it. The nice part about Wes Oliver is that we definitely have our eyes squarely on him now. You can definitely etch his name, in stone, on the official watch list for the 2018 Sophomore All-State Football Team, which we plan to do again provided we either keep the sponsor from this year or get a new one. By all means, if your business, or one about which you know, would like to assist sponsoring next year’s teams leave us a comment on this page which includes your contact and we will be in touch. 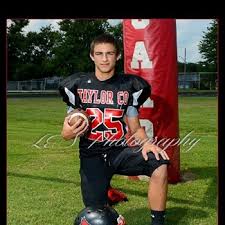 Oliver is only 5-9 and weighs 149 pounds but still uses great burst and explosion into the second level to gain tough, between the tackles, yardage which makes him appear much larger on the field and on film than he measures or weighs. The thing I noticed about Oliver is his exceptional body lean as he comes through the line of scrimmage and how he runs with high knees through initial contact. For a kid of his meager size, he is really hard to tackle. He doesn’t appear to take any negative steps either. What I mean by this is, even when going east and west on a football field, which he rarely does, he is still gaining ground for the offense. There isn’t any backing up in his game, he is always gaining ground…he even falls forward.  I would say his film really demonstrates he understands lean, pad level, and leverage very well. He also runs hard, a trait which every coach I have ever known finds endearing.

All we can say at Kentucky Prep Gridiron is sorry we were late to the party, but we have arrived. We appreciate the Taylor County subscribers who contacted us about this prospect and, if you think we may have missed a kid near you, the best advice I can give you is to subscribe to the site and help us scour the Commonwealth for the kids who deserve to be promoted. We have to be in this thing together for it to work. If you would like to become a subscriber, hit this link here and follow the prompts: https://kentuckyprepgridiron.com/register/