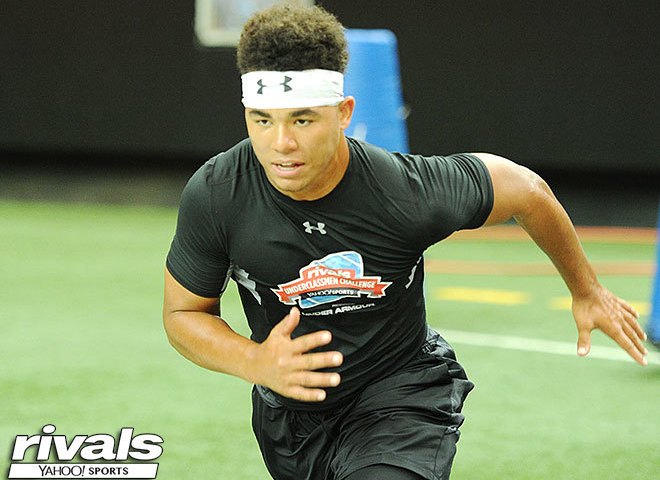 Stephen Herron, Jr., is a 6’3.5″ 235 pound edge terror which some publications have rated as highly as a 5 Star prospect but which all publications, this one included, believes to be Kentucky’s best prospect in the 2019 Class. Like many of Louisville’s elite athletes namely Rondale Moore and Kiyaunta Goodwin, both of whom we have before featured, Herron trains offseason, and even in season, with Chris Vaughn at Aspirations Gym.

Herron committed to Michigan and Coach Harbaugh at the Big House Barbecue Event and is blessed with great size and frame for the position at which he projects, which is Defensive End. Chris Vaughn, who we were able to interview in connection with writing this piece, and who was before interviewed by Allen Trieu, with Scout.com, related to us both that Herron is a…big time athlete who has put in the work and time into his body.

Vaughn has particularly been impressed with Herron’s commitment to the weight room and excelling both on and off the field. Heck, Vaughn told Trieu in an interview for Scout.com he would be proud to let Herron date his daughter, if he had a daughter. Of course Chris, that is easier said when you don’t have one. Off the field, we have been told Herron works with a charity to benefit underprivileged children. Heck, I think I might let him date either of my daughters and I have two.

Louisville Trinity is a tough and rigorous academic curriculum which hasn’t deterred Herron from exhibiting an academic prowess to go along with his physical one. Herron’s clearing the NCAA requirement for admission, or Michigan’s for that matter, shouldn’t be any impediment to his matriculation. Vaughn told Kentucky Prep Gridiron Herron has a 4.2 GPA on a 4.0 scale and takes the official ACT this semester. Herron has taken some practice exams and scored very well, so he doesn’t appear a threat to struggle academically once he gets to college. For kids out there hoping to be recruited, that is important to coaches today. It doesn’t do the school any good to throw scholarship money at players the school can’t keep eligible. Schools with the academics of Stanford don’t usually recruit kids who will struggle with admission anyway, and they offered Herron and really pushed for his commitment sources close to the situation tell us.

Herron transferred into Louisville Trinity from New Albany, Indiana where Rondale Moore and he both played Indiana 6A football as freshmen before relocating. All Herron did at New Albany was start as a freshman and earn the team’s Defensive Player of the Year distinction, so he became a “Rock” at Trinity with the Shamrocks knowing, full well, what they were getting.

Before committing to Michigan and in addition to his offer from the Stanford Cardinal, Herron held offers from Texas and Ohio State among his 17 Power 5 Conference offers which demonstrates both his athleticism and intelligence. We asked Vaughn why he thought his protégé committed to Michigan and he told us he believed Herron felt comfortable both with the campus and program. Herron being reasonably sure Harbaugh was settled and not likely to go anywhere else was important too. For teams still dotting the Shamrock schedule going forward, and teams who will contend with Herron in the Big Ten, Vaughn’s telling KPG that Herron can get a lot better than he is presently may not bode well for tackles hoping to contain him and backs, be they Quarter or Running, hoping to avoid him.

This is Fletcher Long, reporting for Kentucky Prep Gridiron, reminding you to study hard and PLAY THROUGH THE WHISTLE!