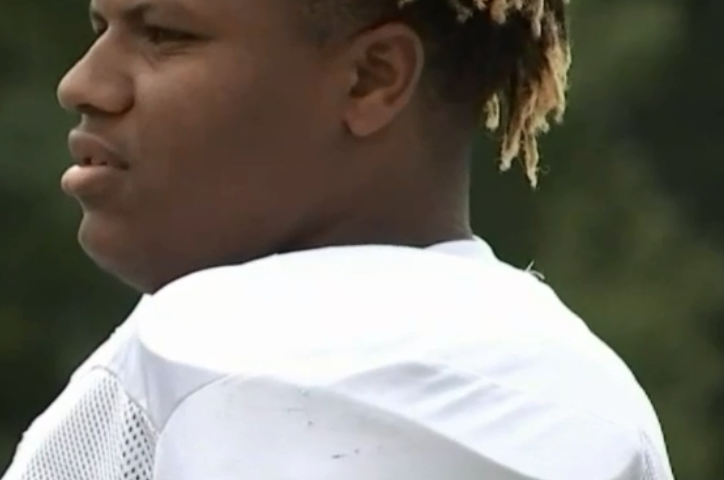 We have before written about this 6-2, 280-pound tackle machine who plays his prep football in Murray, Kentucky at Murray High School. We selected him an Independence Bank Revolutionary Player of the Week in an article published January 30, 2020.

With the season coming upon us and our gathering data on what to expect forthcoming in 2020, we decided to go back and feature this guy independent of the Revolutionary Player series Independence Bank is so generous to provide. This kid is worthy of the ink.

You won’t see a ton of kids in high school, who weigh what this prospect weighs, with his speed, burst, or vertical explosion. Check out his highlights, they are linked for you.

Just hit his surname under the picture to the right which is both blue and underlined, signifying clicking it will jump you to his Hudl page. Sorry for the tutorial but we do have some older subscribers who are challenged by this “new fangled” technology.

Lawrence had 95-tackles in 2019 deployed on the nose primarily. He also had an incredible 26-tackles for loss, 8 QB-sacks, and forced 3 fumbles on his way to being selected 2nd-Team All-State. He is drawing quite a bit of division one, FCS and FBS attention. He was also selected the 5th-best player in the WPSD’s Gridiron Glory series, from where we lifted the featured photo.

That is really kind of a joke. We can’t imagine there are four better football players in all of Western Kentucky (even if you throw in Louisville) than Sebastian Lawrence. If you are looking for a play alike, you couldn’t turn around for the difference between Sebastian Lawrence and Octavius Oxendine. Oxendine was a 4-star prospect who is now enrolled and practicing with the Kentucky Wildcats (and pushing for immediate playing time we hear).

Now, we have before written about all the losses experience by Mayfield. We have said we can’t fathom how they won’t be significantly worse than last year.

Will the slide be enough for them to get overtaken by either Caldwell or Murray for the District-1 title? Don’t know, Murray has lost quite a bit of production too.

The Tigers will be without one of western-KY’s best QBs (Hunter Utley, 2020), a thousand-yard receiver (Tommy Waldrop 2020), and its top three tacklers (Waldrop, Damon Boyd, and Landon Armstrong, all 2020s) Those three defensively accounted for 347-tackles in 2019, with 33 TFLs, and 2-sacks.

More importantly, how much attention did they soak up and redirect way from Lawrence? I suppose 2020 will sort of tell the tale on that one.

Murray’s season notwithstanding, Sebastian Lawrence will be unblock-able (again) in 2020. He’s really worked on his body and he’s looking right!

This kid will tear it up, and continue fielding offers, throughout his senior year. Sebastian is already at the top of the heap, hopefully he can pull his teammates up to the same summit on which he is perched.