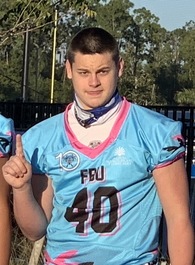 Just to remind everyone what a “No Doubter” is at Kentucky Prep Gridiron, as we haven’t done a feature in this series in a minute (been crushing the “Breakout Players” series), a “No Doubter” is an eighth grader who goes straight into the lineup either during his freshman campaign or even night one/snap one for some. Man, do we have one for you today.

His name is Preston Williams. He lives in Cythiana, Kentucky and he has been attending Harrison County Schools. He is one of the top-5 guys in Kentucky’s ’25 class regardless of position. He and our next “No Doubter,” Austin Alexander, are battling it out for the top-spot among commonwealth DEs at present, Kentucky-wide. It’s anybody’s ball game right now, with no clear leader.

Williams is 6-2 and weighs 240-pounds. We got to watch him dominate at the Team Kentucky Future Stars, central Kentucky tryout, at West Jessamine.

Man was he dominant. The only person who could really physically challenge him was Alexander.

The two of them, going at each other, was like watching Paul Bunyan battle Babe the Blue Ox. It was quite the battle.

Preston reports DE as a primary position. He plays RB on offense. I bet he was fun for 8th-grade tacklers this past season.

We talked to Coach Long, who attended the combine for us. We specifically asked about the lifting numbers.

“I think those numbers are old, truthfully,” Long told KPGFootball. “He looked too thick and ‘muscled-up’ to me, particularly in the back-end, to be anywhere south of 250-275-pounds on the bench and the high-3s to four-plates on the back-squat.”

Long continued, “I’ve hung around a weight room or two and seen a bunch of elite football players weight-train and Williams looks stronger and more explosive than his posted numbers would indicate, at least to me. That is not to say these numbers, if accurate, are bad for an 8th-grader because they aren’t. In fact, they’re super. However, this guy is no ‘normal’ 8th-grader and we wouldn’t blink were we to learn Williams’ reported numbers are actually now quite a bit higher than when they were the last time he logged them onto his NCSA (Next College Student Athlete) profile.”

We asked Coach Long of whom this prospect most reminds him among the 21s in Kentucky he has either watched or featured. Guess what? He had an opinion for us.

“He’s a Darion Dearinger clone in my mind. I don’t remember Darion being this much of a specimen at this stage of his development though the Marshall University signee has certainly blossomed into a 6-4, 265-pound monster you watch today. I feel like Williams’ and Dearinger’s skill-sets are strikingly and eerily similar.”

We asked for some specifics. Long told us, “Well Darion was always able to fire off the end with incredible explosion and bend while maintaining an incredibly low pad-level; demonstrating superior core-strength. Watching Williams in the ‘one on ones’ at the Future Stars tryout, I saw similar characteristics from him.”

“Williams, like Dearinger, plays low, is athletic, flexible with good ‘bend,’ and just explodes upfield and around would-be edge blockers. If you put him on one side and Alexander on the other, Tennessee better have some freakishly athletic tackles or the backfield will be mighty cluttered on game day.”

We asked Coach Long about the kid’s prospects from a recruiting standpoint, at what level of competition does he appear presently destined? “If he keeps working and developing along his present arc, he’s a Power-5 guy at the top-end and a mid-major, FBS-guy on the low end of the spectrum. He’s D-1, frame-wise, for where we see him aligning now.”

“Anyone reading too much into this prediction should remember a Power 5 program is going to want to see his 40-time in the 4.5’s to low 4.6s. Got to be plenty explosive and fast to run past that Power-5 edge-length.”

“The mid-majors may let him get by running a 40 consistently in the 4.7’s, but then again, maybe not. With as many mid-majors upsetting Power-5s these days, it’s getting hard to tell any difference between those levels of play anymore.”

“Williams is clipping it around 5-flat now. His getting substantially faster is almost guaranteed.”

Sounds about like his prospects for early playing time in ’21, doesn’t it? Almost guaranteed…