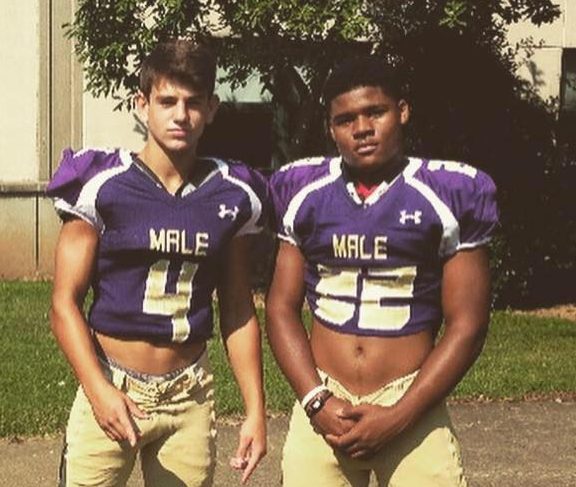 This is the 3rd installment on our series of Plug-in Players. Up to this point, the players we have featured, thus far, are 9th graders who are presently running 1st team on the HS Varsity football team, or expected to make that spot by the season opener, according to the people in the know at the respective schools. I got a call from a subscriber who took me to task about whether the criteria of starting HS Varsity as a freshman was fair as some High School’s, like Louisville Trinity and Louisville Male, don’t start freshmen on Varsity, ever. James Quick didn’t start as a freshman at Trinity. The guy had a point so, today only, I am going to feature some freshmen who don’t start on the Varsity,…yet. However, they are sure, according to sources we consulted, to be on the Varsity and likely to earn a  Varsity Letter by year’s end.

Kamari Williams is a 5’11” 165 pound kid who played in the defensive backfield for the Tennessee Future Stars Team in the Tennessee-Kentucky Game. He appears to have found a home at OLB for the NorthEast High School Eagles and is repping a lot for the HS Varsity. Kamari, in my mind, is sure to win a Varsity letter this year as a freshman at a 5A High School which typically is home to the best athletes in Tennessee’s 5th largest city. Clarksville kids are covered by Kentucky Prep Gridiron owing to it being in the same Metropolitan area as Hopkinsville, Kentucky. Kamari has the length and frame which indicates he is only going to get bigger and thicker as he matures and participates in Strength & Conditioning. Another thing about Kamari is he runs the 40 yard dash in the 4.8-4.9 range and is in the low 4’s in the pro-shuttle. This is already excellent speed and change of direction agility for an athlete playing OLB, and when he grows into his lengthy and somewhat gangly frame thereby adding strength, his quickness and speed are going to be impressive.

The next two players are above pictured in the article’s featured photograph and have the fortune/mis-fortune of playing for Male High School in Louisville, Kentucky. They are fortunate to play for a program which regularly competes for the State Championship in Kentucky’s highest classification (6A) and is the 4th winningest HS football team in the country’s history. They also have the misfortune of playing at a HS which doesn’t start freshmen. Notwithstanding they may begin the year on the Freshman team, they will both play a ton of JV and, we expect, they will be on the Varsity team by year’s end and will both earn Varsity Letters.

Nick Coates (No. 4) is a WR who gets relegated, in some people’s expectations, as a slot guy (and he may well play the slot receiver for Male as a freshman) because he runs very precise routes, has excellent hands, and people underestimate his speed. Nick Coates is one of the fastest 2021 kids in all of Louisville and, let me assure you, like Craig Faulkner (from Richmond, KY) before him, if you play him too tightly, he will embarrass you vertically. Nick has grown to 5’9″ and has added good weight to his frame since joining the Male team in the Strength & Conditioning program. Nick is a kid who would be either starting or second team on any High School depth chart that wasn’t the 4th winningest HS football team in history. Nick Coates was a member of Kentucky’s 8th grade Future Stars team this summer playing well.

The second player pictured is a RB who played for me at the East-West Kentucky All-State Classic, deserved earning the West’s Offensive MVP award at game’s end. He also was the Offensive MVP of the Diamond All-American Game and is a RB I have nicknamed The Boss. Jalin is a 5’8″ 180 pound barrel-racing quarter-horse who is powerful, explosive, changes direction with break-leg (meaning he snaps defenders off at the ankle who try to tackle him) quickness and squares up and punishes would-be tacklers too. Bross (No. 22) will be on that Varsity squad at Male High School quickly. Better write down his name, right now, if you intend to follow this 2021 Class through its graduation from HS because Bross ain’t going nowhere!

The final two prospects will begin the year on the Shamrocks’ freshman squad at Louisville Trinity but are not likely to stay there. What do people say about the rich, getting richer? The first guy is Alton Jefferson, Jr. and he is a 6’2″215 pound guy who played for the Kentucky Future Stars Team this summer. How well does he run you ask for a guy who played NG both this summer and in Middle School? Well, how about the fact he also played RB? Man, that is what we call a Jumbo Athlete! Jefferson is a guy who isn’t at Kentucky’s best football program by accident. Trinity commonly pulls this type of athlete which is why they are Trinity. Jefferson will be called up in October and will finish the year on the Shamrocks’ HS Varsity team.

The second player who will begin the year on the freshman squad at Trinity but will likely come up in October with Jefferson is another former Kentucky Future Star and corner named Christopher Forehand, Jr. Forehand is a 5’7″ 150 pounder who has only allowed one pass to be caught on him all summer while practicing with the HS at Trinity preparing to open this Fall. Forehand who played for the Future Stars team in 7th and 8th grade is a lock-down corner with fluid hips and excellent coverage skills. He always takes the appropriate position and is able to flip, get over the top of and, thereby blow up the deep stuff. Forehand is a kid who makes quick and appropriate decisions in coverage indicating he has a high football IQ, while still being capable and willing to come up and support the Run Defense.

Join us again tomorrow as we continue our series on 9th grade players who will be logging either starting or significant playing time for the HS Varsity teams as the year progresses this Fall. These players we have featured here are as good as any we either have or will feature. These guys just happen to play for programs who spend a lot more time re-loading than re-building. This is Fletcher Long reporting for Kentucky Prep Gridiron reminding you to PLAY THROUGH THE WHISTLE!