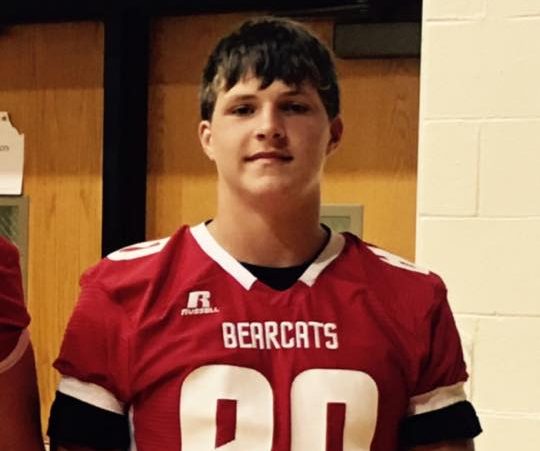 The start of the High School Football season in Kentucky is, literally, one week away and we are in the middle of a series detailing Freshman football players who will either start from week 1 or who are destined to start High School Varsity sometime during their initial seasons. We will begin this 4th submission of the series with one of the more decorated of the newbies in Darion Dearinger.

Darion Dearinger is a kid who has an enviable frame to put it mildly. Darion is 6’3 and 1/2″ and has added a solid 10 pounds of muscular heft since playing this summer in the Tennessee/Kentucky Future Stars game, now tipping the scales at a robust 225. Darion is a two time Future Star, earning Offensive MVP of the 7th grade game and a two-time Team Kentucky FBU member. Darion also made numerous All-American teams including FBU. Sources consulted by Kentucky Prep Gridiron have confided Darion is likely to start on both sides of the line of scrimmage for Anderson County High School this Fall from the outset. That is no small feat to start for the 5A, District 6 Bearcats as a freshman, much less playing iron man football. Darion has soft hands and good speed running very good routes and causing real coverage problems for second level defenders. While on defense, Darion is an end with excellent bend and speed who gets off the line quickly and is able to close out on plays run toward the boundary with his speed, quickness and quick reaction time. Darion has the frame to add room to either stay as a monster TE/DE guy as he matures and strengthens or he could add weight and be that consummate left OT for which all colleges tirelessly search. Darion is almost sure to round into a top, nationally recruited prospect before he is finished with HS.

The last time I saw Frank Turner, Jr. play he was a RB for the Kentucky FBU team, a.k.a. Team Kentucky. Frank, whose father is a former college football player and Defensive Line coach for Kentucky State University, has matured into a prototype for what one searches at the linebacker position. Frank is already first team for the Franklin County High School Flyers, who, coincidentally, play Anderson County High School and Dearinger this upcoming season. Frank is 6’1″ and weighs 190 pounds and is slated to play the Will or Weakside Linebacker in the Flyers’ scheme. Frank, as the picture to the left would solidly manifest, and much like many of the other players featured in this series of articles, just isn’t your anatomically standard freshman. Turner is physical and will get down hill in the run game while having the speed, technique and instinct to defend both the flats and second level in the passing game. His having good technique and football IQ may come from his living with a College Defensive coach. To me, Turner is easily in the top 5 LBs in his class in the Commonwealth and is a prospect we will continue to follow going forward and one which we recommend you follow as well.