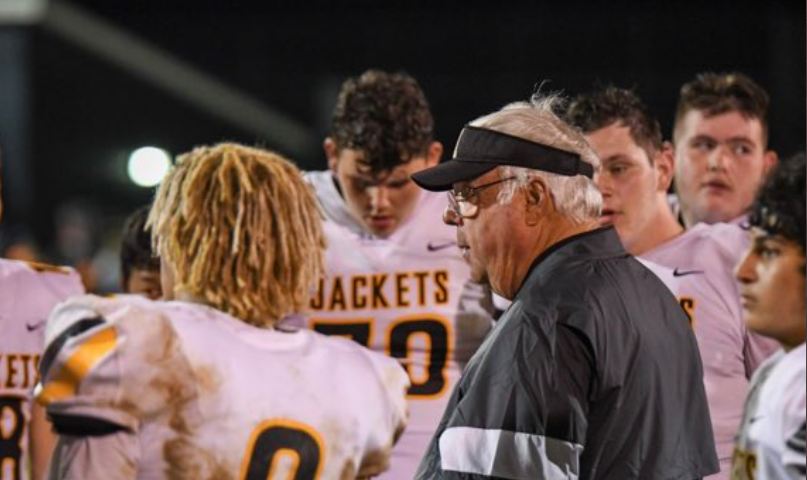 Zach Tong had a tremendous year in 2019. So did Middlesboro under first year head coach, but one of Kentucky’s all-time greats, Larry French.

Tong made the Jackson Times-Voice‘s All-7th District Football team, made the KPGFootball, Sophomore All-State team, and saw his Yellow-Jackets turn around a 1-10 to the tune of an 8-4. Not a lot of players can boast of years like that!

Zach has the “perfect” build to be a star blocking the edge in high school and beyond. Tong is 6-6 and weighs 288-pounds.

Most importantly, he isn’t a sloppy big either. His picture to the right of this paragraph should amply denote that as being true. If the picture alone doesn’t make our case, take a look at his sophomore season highlights, linked below the picture. Just click his underlined name.

Tong played tackle for an offensive front which had a tremendous year. The Middlesboro “front-five” was second to Breathitt County’s “Big-Blue Wave” in rushing yards and TDs scored over the ground. In 12-games in 2019, the Yellow-Jackets rushed for 2,988-yards and scored 39-TDs.

Probably as impressive, the Yellow-Jackets did all of this without the aid of a credible, down-field, passing threat. Put another way, everyone in the stadium knew what was coming and still struggled to stop it.

Tong, who is a star on the “Field Team,” throwing both the Shot and the Disc, is a tremendous athlete on top of being long, tall, thick, and easily passing the “eye-test.” His film demonstrates he is a player who can play in space, and block multiple levels down field. These are rare commodities, for sure, in the high school game from young front-line players.

Maybe the scariest thing to relate in this article is the fact most players undergo their most profound and evident periods of physical development between the sophomore and junior year in high school. There is no telling what Tong will look like this coming season if he spent his offseason working on his strength, power, and explosion like he should have.

Hard to say how good the Yellow Jackets will be in 2020. Losing the 7th-District’s Offensive Player of the Year (Jackson Times-Voice) in Jabari Kyle will hurt. He was a large part of the offense in 2019.

You also have to fact Middlesboro was a handful of plays away from 4-8. While they were 8-4 on the year, they opened with a win over Garrard County in 2019 by two-points, beat Lynn Camp by one, beat Pineville by one, and beat Leslie County by one.

As for Middlesboro catching Breathitt for 7th-District supremacy, they played Breathitt twice in 2019. They got hammered in Middlesboro 57-7 on September 27th with Breathitt playing what was their backup QB, at the time, because Braxton O’Hara was out with a bad back. In the return engagement in the playoffs’ second round the Yellow-Jackets were dropped by Breathitt for the District Championship, 50-15, on the Riverbank.

The combined score over the two games was Breathitt 107 to Middlesboro’s 22. For Middlesboro to compete with Breathitt County they have to figure a way to keep the Bobcats under 50, needless to say.

Still, any team with Larry French at the controls can never be discounted. The fact of the matter is, while his team won a game by two and three games by one, they won every one of the games decided by one or two points.

They went 4-0 in those games in spite of coming off a 1-10, 2018-season. That says a lot about the job French and staff are doing in Middlesboro, Kentucky.

In the end, we see Middlesboro battling it out with Leslie County in 2020 for the right to host the other in the first round. Whichever one of those two comes out on top, gets, as a prize, Breathitt County on the Riverbank for the District Crown. Won’t that be a joy.