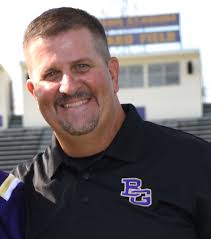 According to a report published by The Daily News in Bowling Green, Kentucky, the keys to the Cadillac program in Kentucky’s 5A Classification have been turned over to Mark Sparder, formerly a head coach for Warren East before working for outgoing Kevin Wallace as Wallace’s defensive coordinator. Wallace left his post at Bowling Green High School to accept a similar position with one of Kentucky’s most prestigious Class 6A programs, Louisville St. Xavier. Kevin Wallace drove the proverbial Cadillac Purples’ Football program for 22 seasons, five of which culminated in 5A State Football Championships. Coach Mark Spader was a key component on the coaching staffs for 3 of the program’s 6 State Football Championships.

Coach Spader, who reports indicate has been acting as both Defensive Coordinator, at BGHS, in addition to his duties as Director of Athletics (a post he assumed last summer), told The Daily News that the BGHS job is one with a lot of expectations and a lot of responsibility…I know it’s a hand full, but I also know I’m excited to begin doing it. The school will begin the process of hiring a new Director of Athletics.

The Daily News also reports Spader began his coaching career at Bowling Green High School in 1991 before moving to Warren East where he stayed from 1994-2001. At Warren East, Coach Spader was the head coach for three years going 10-20 over that time frame. In 2000 however, the Raiders from Warren East went 5-5 earning Coach Spader the SKY Coach of the Year. Spader played his prep football at Hopkinsville High School and was a huge part of the Tigers’ improbable run to the state title game in Class 3A in 1984, losing to Danville High School, then coached by legendary high school head coach Tom Duffy.

Mark Spader started on both sides of the football for HHS, first entering the line-up as a sophomore.  According to his former teammate, Chuck Hughes, who was, himself, a first-team All-Stater and high school, honorable mention, All-American in football, and who went on to start two years at WKU, Mark Spader showed early signs he would be a formidable and accomplished head coach one day. Kentucky Prep Gridiron was able to catch up with the great Chuck Hughes and the following is what he had to say about his former teammate’s becoming Head Coach at BGHS…the most impressive thing about Mark Spader was always his ability to combo at offensive guard and defensive linebacker in spite of his not having an ideal frame to play either. Mark was the embodiment of toughness and grit. Hughes additionally related about Spader that…During our senior year, our starting tackle went down with injury, and Spader, all 5-8, 180 pounds of him, seamlessly moved out to handle the edge blocking responsibilities at offensive tackle. Here he was, consistently out-sized and, particularly out-weighed considerably, but still able to help his team advance all the way to the State Championship Game. Hopkinsville played in the 3A Classification during Spader’s senior year which was, at the time, Kentucky’s second largest Classification of football. Hughes summed it up by saying that, Spader was a smart football player even then, a real student of the game, which both has and will continue to insure his innate ability to successfully fill any coaching position at any level of football.