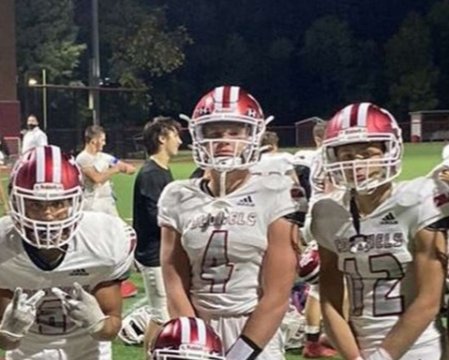 Northern Kentucky football fans complain they don’t get the same level of coverage within the commonwealth as other areas get. They would be right.

I suppose we have surrendered that part of Kentucky to the Cincinnati outlets. Well, we (and I am talking about KPGFootball now) want it returned!

I know we are going to make a more concerted effort to familiarize ourselves with these Northern Kentucky players. For the rest of the Kentucky Press Corp, we hope you will too.

One place to start would be at Dixie Heights High School. You see, dynamic and dangerous dual-threat types at the QB-position don’t begin and end with the super dynamic and talented Cameron Hergott.

Logan Landers at Dixie Heights, a program which plays 6A football in Kentucky (by the way), is one of Kentucky’s top rated returning, dual-threat QBs in the ’22 class. The only way he isn’t the commonwealth’s top-rated, dual-threat guy is because the long reported rumors concerning Cam Hergott reclassifying and returning to Beechwood have now been confirmed as true.

Landers is 6-0 and weighs 190-pounds. As his QB Hit List assessment memorializes, “Logan has excellent size for a 2022 Dual Threat…”

Landers carries a 3.5 GPA and already has a registered ACT score of 20. That will breeze through the NCAA’s Clearinghouse.

He was the team’s third leading point producer on the offensive side. We say this a lot but can’t say it enough that QB’s don’t get credited for points when they throw TDs. Those points are awarded the receiver.

Landers won’t be returning alone to shoulder the burden at Dixie Heights either. Classmate, Kel Hawkins is back in ’21 coming off a ’20 season which would see the two-sided star catch 34-aerials for 426-receiving yards while defensively intercepting 8-passes from his DB-post. Always looking to make plays, the talented WR/DB gained 124-interception return yards and the team’s lone “pick-six.” Even on defense, the guy is looking to gain yards and score for his team.

QB Hit List said about Landers, “Logan has many weapons [in] his arsenal He’s able to fire in high velocity throws into tight windows of space or he can ease up for a softer delivery. (Logan is) Able to generate momentum with a full extension, giving his throws longer range.”

About his movement, QB Hit List wrote, “(Logan) Displays fluid mobility getting to the outside of the pocket. He has a quick first step, getting into position in a hurry. Excellent vision downfield. Squares up nicely with his receivers.” Yeah, we like him too.

As for what Landers says about the playing QB and particularly football part, he has been before on the record saying, “I work hard everyday preparing for the next level. I love going to war with my brothers and will do whatever to win.” We have found these words also ring true.

Landers is an easy take for us at the FBS, mid-major, to FCS-levels. The reason is his having the type athleticism we have above noted lends itself, next level, to playing more than just QB.

We could see him aligned in the slot in college or even playing a hybrid DB/Jack position defensively. With his strength, power, and explosion, he would project to any of those positions.

We believe he will start out at QB. Most schools recruiting Landers see him either under center or behind the center anyway.

As for this next season, this guy will absolutely kill it in ’21. Look for him to post Hergottian (“Cam Hergott-like,” we just made that word up; aren’t we a bunch of Ogden Nashes?) numbers as a dual-threat QB killing it up around the Edgewood/Fort Mitchell area in Northern Kentucky.