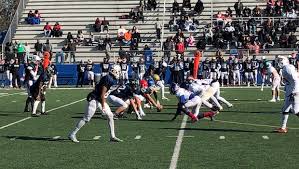 We have before stated, and continue to espouse the fact, Kentucky has tremendous talent available to mine for any college program, at any level, of college football. Kentucky Prep Gridiron has been proven prophetic, once again, by the tremendous showing turned in this week-end in Atlanta, Georgia by two athletes, one of whom has been featured, multiple times, on this very website. Kentucky sent 6 Louisville and Lexington area athletes, this past week-end, to the Georgia Elite Showcase held at Holy Innocence High School in Atlanta, Georgia. The Georgia Elite Showcase was primarily comprised of prep players from the states of Georgia, Florida, and Alabama. Two players particularly, Wandale Robinson from Western Hills High School in Frankfort, Kentucky (Louisville Courier-Journal, 1st Team, All-State selection) and Ethan Bednarczyk from South Oldham High School in the Louisville area (AFI-KPG Sophomore All-State selection), both shone mighty brightly.

First, there were 160 receivers at the camp, which many felt were too many at that particular position for them all to get a fair evaluation. That aside, both Robinson and Bednarczyk made it to the Final 15 which were selected for the Elite Showcase. In the Elite Showcase, the top 15 at the receiver position went one-on-one with the top 15 amongst the defensive backs. The Kentucky prospects also got the opportunity to visit Georgia State University, at the invitation of Coach Daniel Wilcox, whom is presently recruiting coordinator at Georgia State, but previously played in the NFL for 9 seasons. Wandale Robinson was awarded the coveted M.V.P. Award for his efforts and when it was announced he was from the Commonwealth of Kentucky, the camp erupted into cheers and applause.

Both Robinson and Bednarczyk play on the prestigious P2P, 7 on 7 team, based out of the Louisville area and train, together, with Chris Vaughn at the Aspirations Fitness Institute. P2P is off to an 8-2 start on the Sevens Season and has played in tournaments in both Michigan and Nashville, Tennessee. True to form, Wandale and Ethan have led the team in both receptions and touchdowns.