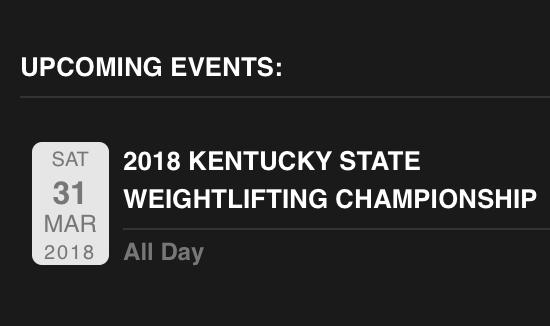 One almost never gets a straight answer from a high school football coach on the question of the importance of strength numbers and power to the sport of high school football. If your son is super strong, you get anecdotes about some other super strong, former player, who sucked at football. If your son isn’t very strong, you get told that is why he isn’t playing either well or often. It reminds me of when I was in the Radio business, and on a large talk station in a large metropolitan city. If my Arbitron (like the Nielsen Ratings for Radio) numbers were really good, the station manager opined them meaningless. If they weren’t, I needed to make some changes or the show would be cancelled.

Station managers were concerned, when your numbers were solid, you would get too demanding (and might want to re-negotiate your contract). Maybe high school football coaches have a similarly natured concern, though currency would not be the commodity. I don’t know, I am just a writer.

In any event, I am familiar with kids who are super strong, particularly for their level of development and who all happen to be very talented football players. Either their families or them have before shared with me how frequently coaches, in their high school football programs, try (really, in vain) to convince either the kids or their families how un-important their having elite strength and power are. Not really sure why, but some coaches attempt, a little too hard, to convince players and their families that power numbers and outstanding performance in off-season weight programs are of minimal importance but only when the player is charting remarkable numbers. What is interesting is that none of those same coaches appear interested in foregoing off-season, team, strength training. Since weightlifting doesn’t really doesn’t make one a good football player, and since you have coached so many super players who weren’t strong at all, let’s quit waisting our time lifting and just do a bunch of gut-busters and calisthenics. Maybe we can get a team membership at Planet Fitness and use their snappy strength and conditioning rubber-bands! Yeah, I didn’t think so.

Success in football, at the highest level, consists of three factors…A. the right physiological mindset for football, B. the right technical preparation (good enough movements, passing, catching skills), and C. the right fitness characteristics for football (speed, power, strength, mobility). Israetel, Mike, Juggernaut, Emphasis added. Dr. Mike Israetel further explains, the most dominant fitness characteristic of football is power (the ability to combine high forces with high velocities of movement). The most fundamental underlying factor of power is strength (and the most trainable, since speed is largely genetic). Getting stronger is the best way to improve power, and football players should be spending most of their off-field training in that pursuit.

Dr. Israetel wrote this in his article which I believe was somewhat deceptively titled. The article, Why Pro Football Players Aren’t the Strongest People in the World, is deceptive because pro football players are among the strongest people in the world, but Dr. Israetel was comparing their strength to professional power-lifters, not every day people, in his article written for a publication called Juggernaut. That on-line publication covers and caters to professional and olympic power-lifters and those interested in power sports. The good Doctor goes on to recommend that football players should try to get as strong as their circumstances and limitations will allow, plain and simple…Closer to the season and in-season, power devlopment should be the goal, and smaller, younger players should also focus on gaining size, but other than that, strength training is king. Is there such a thing…as being too strong for football? Pure nonsense in its highest form.

In summation, your being stronger, more explosive, and more powerful than the man across from you is important in a game which defines its most important characteristics as possessing speed, power, strength, and mobility. Strength and power training are very important to being accomplished football players or every high school, college, and pro team wouldn’t financially invest in weight rooms and paid strength coaches. You just keep pumping that iron and increasing your strength and power numbers and you will see it pay off on the football field next season. That’s a promise.

This is Fletcher Long reporting for KENTUCKY PREP GRIDIRON reminding you to PLAY THROUGH THE WHISTLE!