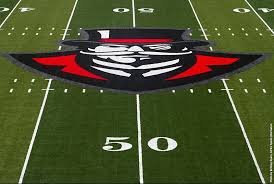 Let me first say, APSU is really running a first-class football program at the very moment and just completed an 8-4 worksheet with a 7-1 OVC mark. I can’t fathom how season results along those lines shouldn’t get the Governors into the FCS playoff. I am not on that particular selection committee but this Governor squad is the real deal and one which could make a run, should they get the chance. I contacted Colby Wilson who is the Associate Director of Athletic Communications at APSU requesting we be permitted both Press Box and field access for the game. Colby is back at his Alma Mater and couldn’t have been more gracious or accommodating to Kentucky Prep Gridiron. No wonder APSU is both flourishing in football and now harvesting talent from the rich and fertile grounds to its neighbor immediately located to the north of its campus. Ryan Ivey, the Athletics Director having played his prep football for the Mighty Mayfield Cardinals doesn’t hurt with Kentucky kids contemplating continuing their football careers in Clarksville, Tennessee. Kyle Hurt, the senior 5’11” 200 pound middle linebacker/fullback was at the game to take in the action with his father fresh off Mayfield’s win in its Regional Final against Owensboro Catholic 40-7. Mafield has a Semi-Final date in Class 2A looming against Christian Academy of Louisville, the Defending State Champions. Good luck to Kyle Hurt and his Cardinals.

I went down there primarily interested in doing a piece about the Kentuckians on the present roster. Namely, I was checking in on Deangelo Wilson a freshman who prepped at BGHS, Shaun Whittinghill, a Sophomore from Louisville, Colby McKee, a freshman from Georgetown, Kentucky (Scott County), Byron Carver, who prepped at Warren Central, and Lloyd Tubman from Seneca. The idea was to do a How they are now faring type piece but the APSU program has stockpiled sufficient talent enabling them to sparing use younger players. These freshman and sophomores biding their time now are the players on whom, in the past, the Governors would have relied heavily. None of them contributing noticeably yesterday is a good sign concerning the overall health of the Governor program. So, anyway, the original piece got scrapped as it wouldn’t have been, in my opinion, substantially substantive to hold much of your interest. All of the Kentuckians are sure to be players on whom much will be expected going forward.

I really enjoyed getting to both see and spend some time with a very good friend of mine from my childhood in Hopkinsville. Cary Fowler, the Defensive Coordinator at EIU and Associate Head Coach, played little league baseball with me, both of us managed by my father, Larry Long. It is amazing that either of us survived that experience. Just Kidding. Anyway, Cary was the Head Coach at Tarleton State in Texas before resigning there and working in college scouting for the Dallas Cowboys a year. When his old position coach at Murray State (Kim Cameron) came calling, the opportunity to get back into what Coach Fowler loves, coaching football, was too tempting to not accept. Cary is happy there and his Defense has performed very well this year at EIU. I also want to mention that Class of 2018, EIU commit from Paducah, Kentucky, Skylar Mayes, whom we featured on June 24, 2017 (Skylar Mayes, McCracken’s Man in the Middle) was in attendance yesterday but I didn’t get to visit with him.

Yesterday, the Governors, who run out of multiple sets offensively, used an imaginative and punishing ground game, churning out 4.9 yards per carry on 66 carries for 325 yards rushing against a rushing defense that, outside of Jacksonville State, had not given up over 100 yards rushing to any team this season. The Governors had the football for 40:27 of the game clock, which Steve Spurrier once called one of the two most meaningless statistics in football, but which didn’t appear meaningless to me from my vantage point viewing the proceedings. Working from memory, it seems the entire commentary from the Old Ball Coach was along the lines of Phillip Fulmer’s won-lost record and the time of possession were the two most meaningless statistics in college football. Well, anyhow, the Governors were ahead much of the game and its ability to run the football against a front which had been stingy against the run all year long limited EIU’s possessions and ability to climb back into the contest. APSU won the game 28-13.

Now the final score was important to both of the teams playing in what was, weather wise, almost unbearable conditions. Coaches we were fortunate enough to engage on both sides of yesterday’s game believed the winner was in the play-offs. As the Governors won, that certainly bodes well for their inclusion in the annual National Championship trek. For a small digital magazine which covers Kentucky High School football, what was even more apparent to Kentucky Prep Gridiron is that big time football is being played at both of these schools and that something special is happening in a city just across the Commonwealth’s southern border. For the fertile recruiting which exists in the athlete and talent rich area of Western Kentucky, it certainly gives prospects an interesting option to ponder. Congratulations to both the Governors and Panthers on their play this past season.