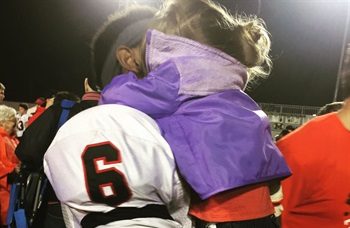 At Mayfield High School, it’s always about the team over the individual. That is how a program compiles an approximate all-time record of 873-255-32 amassing 12 State Titles, 10 State runner-ups, 15 trips to the State Semis, and complete 3 undefeated seasons all while the casual football fan is unable to come up with one single former Mayfield great to go on to either college or NFL stardom. That is not the kind of production one would expect to see from a program with a me first mentality. It is always about the team, over the individual, for the Mayfield Cardinals. The same it true of Kent Trey Matthews. With him, it is always about putting others before himself. We couldn’t even find a picture of him in which he was the focus of the photograph. He is an humble kid who deflects praise and puts emphasis on others over seeking his own glorification. Man, that is refreshing.

Trey, as his friends call him, is some kind of football player and multi-sport, versatile athlete. He is a fixture on the Mayfield baseball, basketball, and football teams. He is versatile on the football field too as he ran for nearly 1,100 yards a season ago, scored 11 TDs on the ground, caught 34 passes for another 598 yards with 11 TD receptions. He was also a Dmauriae VanCleave (Danville) title game go off from leading the Mayfield Cardinals to the first State Title since 2015. As you would imagine, in a team over individual environment like Mayfield High School, I struck out on finding, online, any times or other combine numbers on Matthews. I also have no idea what schools are on him to play at the next level. I can tell you that every college coach at the recent Western Kentucky Conference Coaches’ Combine were talking about the 5-11 180 pound athlete.

Why shouldn’t they be? He might be the best athlete on the best football team in the western end of Kentucky. This is Fletcher Long, reporting for KPGFootball reminding you to PLAY THROUGH THE WHISTLE!