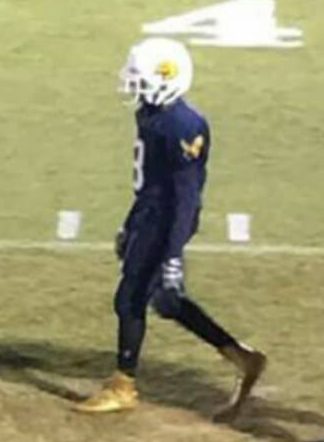 First of all, we at Kentucky Prep Gridiron realize Clarksville is in Tennessee.  However, Hopkinsville, Kentucky and Clarksville, Tennessee are considered the same metropolitan area and NorthEast High School is even on the Hopkinsville side of Clarksville.  Regardless, we are going to cover Clarksville because it is very close to the Kentucky/Tennessee line, the Tennessee-Kentucky Future Stars Game is being played there, and because Clarksville is largely ignored by other media outlets in Tennessee.
Kamari is a 5’10” 165 8th grader who plays RB and Strong Safety for North East.  With apologies to both Kamari and his dad, Tyrn Williams, himself a football coach, at Kentucky Prep Gridiron, we believe Kamari’s days in the offensive backfield as a running back are limited.  Kamari has really long arms, is high waisted, and has the frame which appears he hasn’t even come close to reaching his vertical stopping point.  Like LaVell Wright from Elizabethtown, Kentucky, whom we have before featured, we think Kamari is a perfect candidate for protecting the Defenses back four from vertical attack.
Kamari is rangy in the mold of 2018, 6’4″ Safety from Christian County High School Cory Trice and his length is one of his most pronounced assets.  Kamari is also way more coordinated than many kids his age as lengthy as he as Kamari made the 7th grade Tennessee Future Stars team last year and played Safety in that game and played it very well.  We don’t just expect big things from Kamari going forward, but we anticipate Kamari will grow into either a slot receiver or even a TE in some sets.  We also believe he will continue to play defense as either a Free or Strong Safety able to flip his hips and cover vertically or have the length and speed to close out on a receiver as he comes out of his break.  Kamari had one of the fastest pro shuttle speeds at the Tennessee Future Star’s combine in Nashville which shows his spacial quickness and is an indicator of his future cover skills.
We fully expect to see Kamari in Clarksville battling Kentucky in the Future Stars game and why not, Kamari lives there!  Remember ballers…PLAY THROUGH THE WHISTLE!