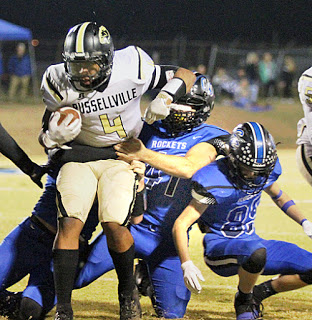 Who here can remember when the Russellville Panthers owned the “Far West” in the 1A classification in football? Maybe you aren’t old enough, those of you reading this, but we sure are.

They were, undeniably, the class of the classification, west of Louisville, historically. Now, it’s Crittenden County.

Coach Mikie Benton has come home to plug the leaks. He is beginning to make some real progress.

Russellville made the Semis, and went 12-2, as recently as 2016. The ’20 season would see the Panthers beat Franklin-Simpson (4A) in the Linton-Wren Kickoff Classic, and finish 5-4 on the abbreviated year hanging around the top-10 of the Associated Press‘s Top-10 weekly polls.

This year the Panthers are getting back some key components. We have long been fans of players like Lennon Ries, who has been a star for the program since he played middle school for RMS.

Ries, as good as he is, will be far from lonely in the “star” category on the Panthers’ Roster this coming Fall. We would be remiss in not mentioning the rumors swirling around Logan County, Kentucky the Panthers may see a return of a kid who, reclassifying under SB-128, formerly played there before transferring cross-town. We are going to leave this player nameless until the rumors are either confirmed or discredited.

Of course, Jovari Gamble returns, in addition to Ries, and potentially this guy to whom we have alluded in the last sentence. Should the three of these players find themselves on the same roster in ’21, the Panthers will be even more of a handful than they have been of late.

Gamble was the team’s leading scorer, leading rusher, all while still having to play defense, which is common on Class A rosters. On defense, he was fourth on the team in tackles, fifth in TFLs (6), and collected an interception along the way to fully stuff his stat-sheet.

Neither his versatility nor his athleticism should be the least bit surprising or even in question. Gamble has been a three-sport athlete in his high school career playing baseball, basketball, and football.

To us, the only question recruiters may have is “How fast is he? Can he separate?” He looks plenty fast and capable of separation to us when we watch the highlights (above linked under his picture).

His film shows him gaining both 2nd and 3rd level separation from some pretty good programs with athletic players at both levels. It would help his cause to run track.

Coaches who tout superior running times for athletes who don’t run track are often discredited by recruiters. Speed aside, this kid is a definite “take” for a college program and there are some lining up and evaluating him as we speak.

Kentucky Wesleyan has been active in his recruitment. There may not be a better staff at evaluating talent in the Bluegrass than K-Dub. The best part is Gamble wouldn’t have to change his feline affiliation as both teams use “Panthers” as mascots.

Jovari Gamble will have a huge year in ’21. The Panthers look poised, at least to us, to make some noise on its level of competition this coming Fall, which would be nothing new in the span of the program’s playing history.

If the rumors we have alluded to are true, concerning RHS getting back a former star who transferred away and is now reclassifying to transfer home, then this will be a team to monitor coming out of the west in ’21. The same might well be true even if this transfer rumor turns out to be a load of bull.