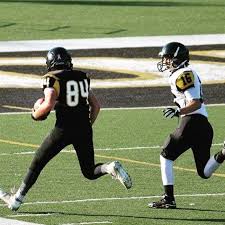 The biggest complaint about people from Johnson County, from people who aren’t, is that Johnson Countians think they are the end all, be all, of high school football. Well, in 2015 Johnson Central played for the State title in football losing to South Warren. In 2016, they won the State Title over Franklin-Simpson. In 2017, they went to the State Title game for the third consecutive year, losing to Franklin-Simpson. Three years…three State Finals…they know something. One thing about which they know is developing talent. It seems every year I am writing about some Future Star on Team Kentucky from Johnson County. Whether the kids’ name is Cameron Willis, Hunter Scott, Zack Russell,  or Owen LeMaster, the list of young Johnson County football players just keeps swelling.

There was a guy named Karl Marx who wrote a book entitled The Law of Increasing Poverty where he complained of the rich getting richer and the poor getting poorer. Marx wasn’t the only one to come up with the concept as Andrew Jackson once said, in vetoing the bill to create a national bank that when the laws undertake…to make the rich richer and the potent more powerful, the humble members of society…have a right to complain of injustice to their Government. Then there’s my favorite, as said by the Country’s 9th President, William Henry Harrison…It is true democratic feeling, that all the measures of government are directed to the purpose of making the rich richer and the poor poorer. This is how the rest of Class 4A feels when looking over the roster at Johnson Central. With the influx of talent coming up from the middle school ranks yearly, the rich just perpetually seem to get richer.

Now we come to Keygan Pelfrey, whom, according to his dad, Brian, comes from the poor Johnson County Pelfreys, as distinguished from the Pelfreys who spawned and reared John Pelfrey. If you don’t know who John Pelfry is, please stop reading this on-line magazine. You don’t know enough about sports to enjoy what we publish. Keygan isn’t poor in athletic ability, and probably not money-wise either, as it has been my experience people claiming to be from the poor side of any surname generally aren’t very poor at all. Keygan is 6-1 and weighs 180 pounds, running the 40 yard dash in 5.1 seconds. He has excellent length and size to work the middle zone from tight-end and the power, explosion, and disposition to fill the TE’s role as the 6th offensive lineman in the running game. Keygan registered a 27 inch vertical about a year ago and, likely, has even more vertical explosion now than he did then, as he presently squats nearly 300 pounds. Keygan is also a 225 pound bench-presser, just in case any of you linebackers should think you can come up to the line and jam him. Do so at your own peril! Keygan has played three years of football for Team Kentucky FBU and now finds himself on the Future Stars’ version of Team Kentucky ready to help lead Kentucky to three straight 8th grade victories in the annual classic.

Johnson County’s Keygan Pelfry, just another example of the rich getting richer around a football program bursting at the seems with young talented football prodigies. This is Fletcher Long, reporting for KPGFootball, reminding you to PLAY THROUGH THE WHISTLE!