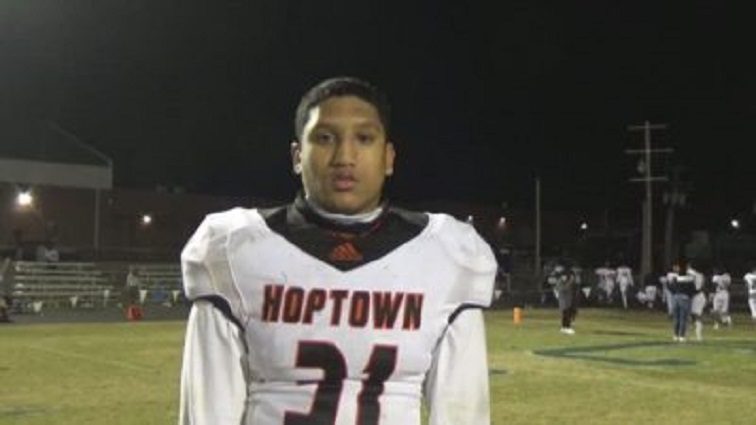 Hoptown’s Mercer is “The Man…“

Daisjaun Mercer (’23) had a big night against a Calloway County team which had been playing the Hoptown Tigers pretty tight the last few years. Mercer, who rumor has it has picked 17-passes in his career (and he’s only a junior), picked off two passes, housing one, and caught a 43-yard TD pass from Tre Jefferson on the night.

Breathitt getting hot at the right time…

Jaylen Turner personally accounted for 20 of the Bobcats’ 62-points on the evening. Breathitt rolled over Knott County Central 62-24 in a game which was actually worse than the final score would make it seem.

QB Joe Humphreys (’22) is among Western Kentucky’s “best kept secrets.” That doesn’t count for us as we were saying he was Owensboro Kentucky’s best high school QB even before Gavin Wimsatt bolted for Rutgers earlier in the year.

Against Henderson County Friday night, the Daviess County QB (Humphreys) completed 14 of 30-passing attempts for 234-yards passing and 4-thrown TDs. He also rushed the football 8-times for 118-yards and a TD on the ground.

Freshman Montavin Quisenberry (’25, “Q”) has been identified by us as being among the very best in his graduating class. Friday night, he didn’t do a single thing to dampen our enthusiasm.

Another outstanding freshman whose team also came up a little short was Paducah Tilghman’s Jack James (’25). James was 21 for 33 through the air for 187-yards with 3-TD passes. Paducah Tilghman lost to Union County in a pivotal 3A, first district tilt. Union County is now 7-1 with its lone loss being to 2A Caldwell County.

Madison Central ran its mark to 7-1 in beating the tee-total stuffings out of 8th-district foe, George Rogers Clark, 43-7. For the record, KPGFootball predicted the final score would be 43-0 so we just barely missed hitting this one dead on the head of the nail.

Kyran Jackson (’22) had 8-tackle to pace the defense with 2-QB sacks while Haden Kiser (’24) had the other two sacks on the evening. Brady Worrix (’22) picked the lone pass.

Madison County hosts Bryant Station next weekend for the number one seed in the first two rounds of the playoffs for its district in Class 6A. Both teams enter the contest with identical 7-1 marks.

We picked Lexington Christian to beat Somerset Friday night 63-0. Well LCA won the game 63-13. Junior varsity defenses often struggle with the angry varsity unit of the team getting mercy ruled or “clocked” as that is sometimes called.

Xavier Brown (’22) rushed the football 3-times for 154-yards with two of the three finding the end zone. Mason Moore (’22) caught two passes for 102-yards and a touchdown while snatching the team’s lone interception. Moore demonstrated, if the football is in the air, he’s liable to be the one to come down with it; regardless of which QB threw it.

Johnson Central beat Harlan County in 4A action, 43-8, Friday night. Carter Conley (’24) came within a whisper of eclipsing the century mark on the ground with 95-rushing yards in only 6-carries and a TD.

Johnson Central is now 6-2 with a huge trip to play a 6-1 Letcher County Central team looking to seize the one-seed in the upcoming first two rounds of the KHSAA playoffs. Letcher is smelling “blood in the water.” Maybe premature but we shall see.