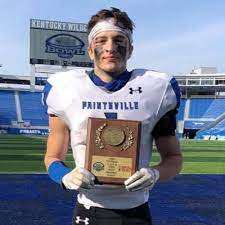 Phelps rushed the football 30-times for 205 yards and 4-rushing TDs. He caught a pass for 46 more yards, and scored 24-points for his team. Phelps’ Paintsville Tigers beat Class 4A Knox Central 34-14.

Mercer County’s Jackson Peavler (’22) had a big night for the defense. Peavler had 15-stops in Mercer’s 22-21 win over Southwestern, a Class 5A school used to winning lots of games. The Class 3A, District 4 Titans are off to a fast start with a loss to Class 6A Bryan Station its only blemish.

Cameron Hergott was only 5 for 5 for 37-yards in Beechwood’s 27-7 victory over Class 5A perennial power Covington Catholic. That would mean he just had an off night, right? Wrong! Hergott carried the ball 16-times for 173-rushing yards with 2-TDs.

Hopkinsville and Christian County have one of the commonwealth’s most heated rivalries. With the schools set to merge, it is sad it is coming to an end. Hopkinsville won what maybe the second to the last installment 38-0 on Friday night.

Well these were just some of the outstanding performances from around the horn in the commonwealth of Kentucky. Which one wins the jerky this week? You’ll have to wait and see.