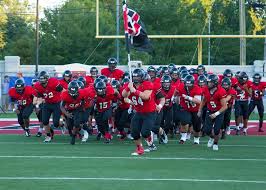 I thought it appropriate to attach to any article about Imonte Owsley a picture from off the internet of the background to his highlights from 2016, his freshman season. Why? Well, because Imonte Owsley, who is known simply as Monte all over Owensboro, Kentucky, is a human highlight reel and apparently was such even as a freshman. The freshman year is a time where only the most special are getting any varsity run, much less accumulating highlights.  Monte whom we selected as an athlete on our AFI-KPG Sophomore All-State Football team, is an athlete and my be one of the most explosive, quick, speedy, and dynamic athletes in all of Kentucky. Monte is 5-8 and weighs in at a solid 175 pounds.

A sprinter on the Owensboro Senior High Track Team, Owsley reports a 100 meter sprint of 11.04 seconds. According to the table converting 100 meter times to 40 yard sprint times, that is roughly a fully automated time (laser, FAT) in the low 4.5’s. Owsley has been hand timed at 4.4 seconds over 40 yards and that seems correct. After all, Owsley is like Hopkinsville’s JeVon Leavell, a short legged kid whose 60 meter time would be a more accurate reflection of his forty than the 100 meter time. When Owsley was a freshman, at the SIU HS Boys Indoor Invitational, he turned in a 7.12, 60 meter time participating for Owensboro’s Track Team. According to KYTracXC, the 60 meter to 40 yard conversion is to take the 60m time and multiply by .6096 to identify the time it would take to run 40 yards. Under the accepted formula, Owsley’s forty time, as a freshman, was 4.34.

Now OHS has some of the best young talent in it’s 2020 and 2021 classes anywhere in Kentucky and it would appear the time is now for that talent to start asserting itself. In addition to Imonte Owsley, Owensboro has the best linebacker in the 2021 class (Austin Gough), a top linebacker in the 2020 class (Trace Grenier), the best nose guard in the class of 2019 (Diamond Glover), a prized transfer who was set to start at HHS before moving to Owensboro (Darian Woodruff), and a super-stud QB (Will Warren) whose mover over from Owensboro Catholic has the Red Devils switching offensive schemes. When you couple this with what amounts to Kentucky’s fastest player or, at the very least, Western Kentucky’s fastest player, you have to imagine it will be a major offensive emphasis to get the ball in his hands more, and should that be achieved, you have to think Owensboro High School will be a tough out in the 5A classification come playoff time. At least, that’s how we see it at KPGFootball.