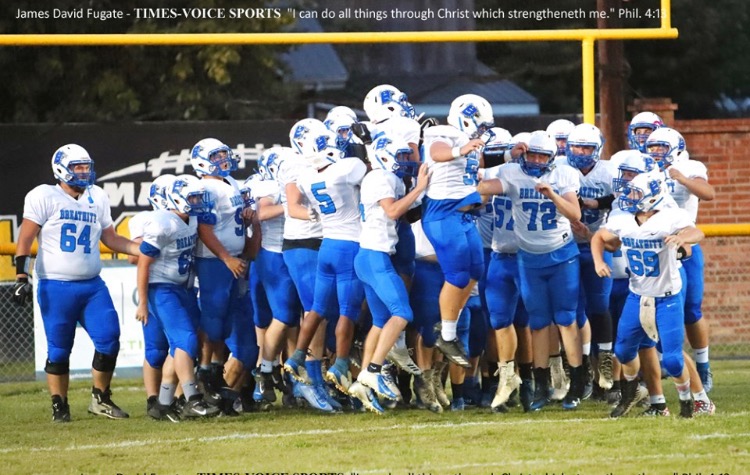 The below is a report regarding how the top teams in Kentucky in each of Kentucky’s 6 classifications did this past weekend. The witty commentary is provided free of charge.

2. Lou. Trinity (5-2) lost to Indpls Cathedral, IN, 28-7. Trinity may have to rethink the playing so many out of state teams. It is killing them in the RPI power rankings and so is losing.

7. McCracken County (5-2) beat Daviess Co. 50-36. McCracken County’s offense is fan-freaking-tastic. McCracken’s defense is going to be a real problem the further into the playoffs it advances. Daviess County is a huge disappointment. No way they should be this poor.

3. South Warren (6-1) lost to Bowling Green 14-3. Bowling Green snapped South Warren’s 21-game winning streak. South’s QB going down to injury and missing the game was as much a culprit as anything else. We keep wanting to believe Bowling Green isn’t very good this year, like when they lost by 14 to St. Xavier and dropped their opener to a Tennessee team coming off a 2-10 year in Father Ryan, and then they do something along the lines of beating McCracken 42-12 and South Warren 14-3.

5. Owensboro (6-1) beat Muhlenberg County 54-0. Red Devils are for real. They won’t lose again until deep into the playoffs. They have the horses to win the whole thing if they can get a few IR guys (like Austin Gough) back for the stretch run.

8. South Oldham (6-1) beat Atherton 50-6. First year coach Nino Brown will guide Atherton to finer days in the not-too-distant future. That aside, South Oldham has the best team it has had in quite a while.

4. Logan Co. (6-1) lost to Hopkinsville 21-6. Logan is rethinking the playing Madisonville-North Hopkins and then traveling to Hopkinsville on a short week of rest. We have heard from both the Logan and Hopkinsville people at the game the officiating was poor, putting it mildly. Want to know who blames losses on referees? Losers! Who’s your daddy Logan? That’s right, it’s Hoptown!

5. Lou. DeSales (4-2) beat Paducah Tilghman 49-14. Paducah Tilghman thought it was ready for “Big Boy Football” until some real big boys unloaded. When PT gets right, they will compete with teams like DeSales and Mayfield. They can feast on all the cupcakes they want, but they won’t be respected until they can beat teams like this.

1. Somerset (6-0) beat Hazard 21-9. Final score here is deceptive as Somerset on a 4th and 6, looking like they were going to have to give the ball back to Hazard with Hazard having an opportunity to come down the field in the 4th Q and win the ball game, faked the punt and run it in for a TD which broke Hazard’s back. Both of these teams are really good.

2. Mayfield (6-1) beat Caldwell Co. 45-7. Caldwell County looks to be running out of emotion and magic as they get smacked back down to reality.

4. Breathitt Co. (7-0) beat Morgan Co. 35-6. This margin is meaningless. The clock ran from the opening kick and Morgan had a -10 yards total offense when Coach Moore called off the dogs. Breathitt will be a real problem for someone to have to solve before this things is ultimately concluded.

7. Murray (5-1) beat Fort Campbell 49-17. Murray could have beaten the Falcons as badly as it wished. Seems unpatriotic to run up the score on a US Army based high school. Murray took it easy on Fort Campbell and the score was still lop-sided.

8. Beechwood (2-4) beat Dixie Heights 14-10. Beechwood narrowly escaped another loss in this one as they trailed late.

9. Todd Co. Central (5-2) lost to Hancock Co. 36-18. Todd County’s impressive run of 5 weeks in the top 10 is likely over now. What is not over is Coach Darell Keith’s candidacy for Coach of the Year honors. Ja’Twan Graham, all conference RB, missing the game owing to injury and starting QB, Bryce Nolan, getting knocked out of the game in second half doomed the Rebels in this one.

3. Hazard (4-2) lost to Somerset 21-9. Hazard, who has lost twice, may still be the best team in the 1A classification. Upcoming game with Pikeville gives them a chance to show everyone.

5. Paintsville (4-2) beat Union, VA 21-14. Elite team who won an impressive game this weekend which will only count as .500 in the strength of schedule component for the RPI under the KHSAA formula.