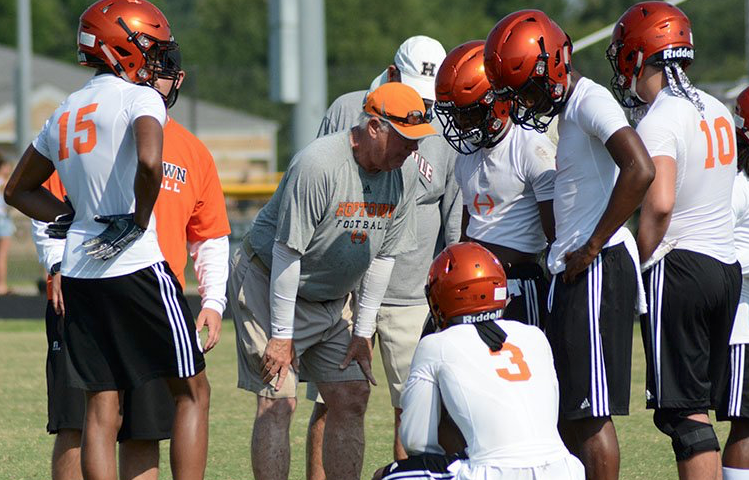 Let me start off by saying I am never sure what a team’s performing well during 7 on 7 (Sevens) really means. For instance, a few weeks ago in the Riverdale 7 on 7 event, Clarksville High School beat Clarksville Northeast in pool play. The Wildcats did very well in the tournament losing in the semifinals to Shelbyville Central, the eventual champion (out of 26 teams) on the very last play. Does that mean CHS beats Northeast on September 28, 2018 at Wilma J. Richardson field? I don’t know. I can tell you if I were picking the game now, and the two of them suited up and played tonight, I would take the Eagles and give the Wildcats a couple TDs. Northeast has, in addition to Heath Williams at QB, Tyrique Freeman and Fred Orr in the backfield running the football. It is probably the best backfield in its classification in Tennessee.

On the other hand, I have had experienced high school coaches, with over two decades under their belts, insist that years in which its Sevens’ team was good, so was its football team. Sevens ball is good for installing your routes and pass plays, offensively and working on your coverages with the 2nd and 3rd levels, defensively. It favors teams who have quite a bit of throw game and doesn’t tell one much about teams which pound the ground like a Belfry, Franklin-Simpson, or a Johnson Central, par example. Regardless, it is an ever popular aspect of high school football and one about which KPGFootball both commentary and questions. So, with the 2018 Sevens’ season winding down and the pads popping fast upon us, here’s what Sevens has told us about Hoptown, or, at least, what we think it has told us.

Hoptown appears to have quite a few weapons at QB Jay Bland‘s disposal and one of the most intriguing one is pictured to the left of this photograph. Incoming sophomore, Reese Jesse, Jr., at 6-3 and 175 pounds not only needs to take a big step forward in his personal progression into football stardom but certainly has all the tools to do just that. Jesse has shown he has the speed to separate from back four defenders and the length and vertical explosion to be a very difficult, outside matchup. No one has ever questioned his hands. For Jesse to be a Division I receiver prospect, and at KPGFootball that is exactly what we believe him to be, he has to show recruiters consistent effort. He is a long-strider, and long-striders are often maligned as being blasé about effort and hustle. It is often both unfair and undeserved and mainly stems from the long, smooth glide giving that appearance more than it being a reflection on the player; but Jesse is soft spoken and laid back and he will fight that impression with schools. The fact of the matter is, HHS opponents can’t assign its best corner and safety help to Jesse’s side of the field, this season, because of the Division I, college receiver on the other side named Ellis Dunn. Jesse will get corner number two and in mostly one on one, without safety help over the top, scenarios. He showed this Sevens’ season he can dominate that matchup when he wants to, now he just has to work on the want to.

Jay Bland and Ellis Dunn have demonstrated they are one of the most potent passing combinations in the western end of the Commonwealth. Of course Ellis has already been offered D-I and Jay Bland will be a D-I college player too. Remember, Bland is a rising junior and, this time last year, Dunn didn’t have an offer yet, so the fact Bland hasn’t been offered, going into his junior season, is meaningless. Schools are probably holding out to see some junior film on the quarterback coming off an All-State sophomore season. One thing is sure, Bland‘s number of weapons to target in the down-field passing game has gone WAY up and sometimes we have wondered if it has slowed down his decision-making, when he’s dropped back, because there are just so many options of where he can target the football.

A Tiger who is a college football player, for sure, but who teams are holding on to see film of him during his senior year, as his entire junior year was lost to an ACL tear, is Jatorion Dillard. Prior to injury, the 5-7, 185 pound running-back had a registered forty time of 4.54 seconds with a 360 pound back squat and a 225 pound power clean. When Jatorion gets back to 100% of what he was prior to the injury before last season, which happened during a celebration after scoring a touchdown along the sideline at a scrimmage of all places, the offers for this running back to play in college will come in droves. This Sevens’ season showed why. Dillard is one of the most potent weapons on the Sevens’ team for Hoptown, fully demonstrating how potent of a weapon he is catching footballs from out of the backfield. Last night, against Clarksville Northeast, Dillard caught a pass down field and just as he turned to run, he and the corner collided, full speed. It wasn’t dirty on either part as they were both going after the football and running too hard to pull up but Dillard ended up trucking the corner. That corner shook himself off and looked at our sideline and said, comically, where am I; showing he was both a good football player and a good sport. Dillard, who has described himself as being 90% back, has shown in Sevens that 90% of Dillard is still one of the most versatile backfield weapons in Kentucky’s 2019 class. If he’s healthy all season, he will have one whale of a year. Remember where you heard this!

Ellis Dunn, as a Tiger, is one big, bad cat. Hoptown fans are going to love this guy and he has it all. Of course he is holding an offer to play Division I college football, with more offers quickly forthcoming, so the fact of his prowess is not lost on anyone. The big thing this offseason Ellis had to show was separation speed and he has shown ample amounts of it. Ellis is a guy who was timed in the 40 by a D-I defensive coordinator at 4.55 seconds, which is fast, but Ellis, according to a position coach who has coached him previously wears his pad well. For those of you who may not know what that means, he’s as fast with his pads on as he is without them. Having seen him in quite a few live action scenarios, KPGFootball readily attests he possesses a gear when he jets into hyper-drive which hasn’t been seen wearing Hoptown‘s Orange and Black in several years. When he depresses the gas pedal to the floor, he’s gone and won’t be caught. I have heard it called football fast, as opposed to track fast, and, with gear on, Ellis Dunn is as fast or faster than any DB/WR on Hoptown‘s schedule.

Defensively for the Tigers, we have learned that, with Ellis Dunn and JeVon Leavell at the corners, the Tigers can eliminate a lot of edge, downfield threats. Both those guys are fast and fluidly flip their hips and get on top of vertical routes in excellent position to jump through a receiver to the football. Jaime Cooper-Roman, the guy whose absence last year was also injury related, is really long and covers, second level, very well using his excellent length and good speed at linebacker. Jaime also holds an offer, entering his senior year, to play on Saturdays on an institution’s dime which is significant for any player coming off a junior year plagued by injury. Another guy who has come out for football is one of Kentucky’s most coveted guard prospects in the 2021 roundball class. Alijah Watts has the length, athleticism, and toughness to really make a difference when he learns the nuances of safety play. He could also see time at receiver.

Final Analysis… While we didn’t see the big boys from Hogtown (OL) during the Sevens‘ competitions, nor did we see the defensive trench-men, but the seven defensive and seven offensive players we did witness went 10-2-2 during the competition and finished in the final 4 of one of the biggest tournaments in the South at Riverdale. Will Hoptown be good in 2018? I don’t think that to be much in question. I don’t know if that is what the Sevens‘ performances necessarily mean, but Hoptown will definitely be good.