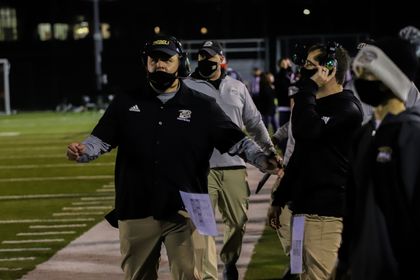 It was win or go home, Friday night in round-four (Semi-State Championships) and we were handing out Semi-State hardware at the end of these games. Playoff performances make more of an impression on us at the magazine than regular season production.

Okay, okay, West Carter came up a little short (lost to Beechwood 35-34) but these guys sure showed everyone they were, in fact, an elite 2A team in 2020. Leetavious Cline (2021) rushed the football, against Beechwood in a losing effort, 36-times for 200-yards with 2-rushing TDs.

Gavin Gibson (2021), committed to Centre College, had an incredible night, defensively, for the Comets. Gibson had 11-tackles, 3-TFLs, and one of the team’s two QB-sacks. Gibson and his defensive mates were able to hold Beechwood to 90-rushing yards, a testament to how the Comets pushed this game to the final horn.

Teammate, Orry Perry (2021) threw for 3-TDs making the tandem of Perry and Cline account for all 5 of the team’s scores. Orry Perry is the type of QB any high school in Kentucky would want under center in a big game. For what he lacks in flash, he more than compensates for in “grit,” “football IQ,” and just being a winner.

Perry reminds this author about what the late Paul “Bear” Bryant once said of John David Crow, his QB at Texas A&M and a member of the “Junction Boys.” Bryant said, “When we need 6-yards, John David gets us 7.” Yeah, that attribute sums up Perry pretty well too.

Jagger Gillis (2021), Boyle County’s QB, was 18 for 21 for 232-yards passing with 2 TDs. Boyle County held Hopkinsville to a -20 yards rushing and only 99-yards passing on the evening. McDaniel and the Rebels will get Franklin County in the 4A State Championship game.

Will McDaniel (2021) led Boyle County to a huge win against visiting Hopkinsville. McDaniel carried it 18-times for 160-yards rushing with 3-rushing TDs. McDaniel in 9-games of action in 2020 has gained 1,023-yards from scrimmage in 153-carries with 19-rushing TDs to lead his ball club in all of the three categories. McDaniel has caught 21-passes out of the backfield for another 292-yards in receiving and 3 TD catches. Quite simply, he is an extraordinary football player who will have quite a career at the next level.

Austin Gough (2021), a former winner of the Protein-packed Performer Award, had 11-tackles to help lead the Red Devils over Frederick Douglass in the Semis. Owensboro will face Bowling Green for the title.

Nick Broyles (2021) had a big night against Johnson Central for Franklin County. He completed 16 of 23-passing attempts for 225-yards and two TDs on the night.

Fred Farrier, II (2021) showed why he just may be the best receiver in Kentucky. He caught 8-passes for 103-receiving yards and a TD. On a night where the Flyers could only manage 63-rushing yards, the Broyles to Farrier combination came up big-time in a 20-12 final margin.

Harris Phelps (2023) did Friday night what he has done all year. He came up huge for his Paintsivlle Tigers. Phelps had 21-carries for 170-yards rushing with 3-TDs in a game Paintsville won 21-7.

Karsten Poe (2021), committed to Centre College, gained 79-yards in his 14-carries and ran the offense under center, managing the offensive flow and completing 2 of his 3 passing attempts. Centre commitment, John Blackburn (2021), had a big night up-front and on both sides of the line of scrimmage. Behind the Paintsville, “Big-man,” Paintsville rushed for 348 yards on 54-carries and all three of Paintsville’s scores. Blackburn also contributed 6-tackles on defense.

Mason Lovely (2021) paced the defense for Paintsville as he has done much of this season. The All-State caliber LB had 11-stops, including 1 of the defense’s 3 QB-sacks.