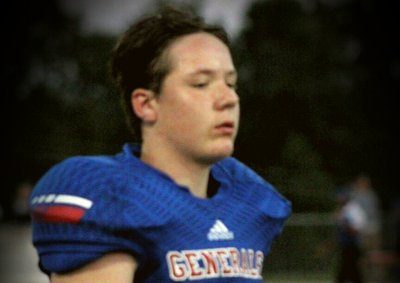 Clay Dalton‘s Generals from Jackson County (McKee, Kentucky) had a really tough year in 2017. It’s hard to suffer through a 2-9 seasonal result, and getting bounced from the KHSAA playoffs, round one, to Powell County, who was 6-4 at the time, by a score of 47-14. It only dims the mood even more when the only two teams you can beat on the schedule are a hapless 1A football team in Berea High School (0-10) and class 3A, district 8, doormat, McCreary Central (2-7). It can get challenging to find the bright spots. Now, I have always heard that when a younger player and one who is older are of roughly the same or similar ability, in high school football, you should play the younger guy. After all, you have more time with the rising sophomore than the rising senior. Is that the case in McKee, Kentucky? Well…could be.

Isiah Baker is returning for his senior season in 2018, but let’s not pretend he was tearing it up in 2017. Baker completed only 66 of his 153 passes for 1,022 yards and 7 passing TDs. In a lot of offensive systems in Class 3A, those numbers, in the passing game, aren’t too terrible; but Baker threw 13 passes to someone in a different colored jersey. An offense which only scored 14.18 points a night just can’t surrender 13 additional possessions in 11 games, thereby putting their defense back on the field, when the defense surrenders almost 38 points an outing. Surely, you can see the problem with that!

Now something Baker did pretty well in 2017 was run from scrimmage where he gained 332 yards in 86 attempts and scored 7 rushing TDs. Doesn’t sound like a lot but the Generals only gained 1,377 yards on the ground last year, so that is nearly a quarter of the entire ground production from this one player. So, the million dollar question around McKee, Kentucky may be should they move Baker to running back and turn over the reigns to Class of 2021’s Nick Baldwin? KPGFootball believes the answer is a strong maybe.

The reasons are myriad. First, Jackson County has to do something offensively to increase its production. The Generals just can’t continue to surrender nearly double the yards on the ground it gains, nor can it continue to only score 156 points over an 11 game season. With a running game struggling, the Generals also have to be able to throw it better than the 93.73 yards passing a night it tallied in 2017. Enter hard-charging Nick Baldwin, who has been attending numerous camps this summer and has looked good throwing the ball playing Sevens (7 on 7 passing league). Baldwin is 5-10, weighs 165 pounds, and, from the film we have reviewed, gets the ball out quickly, stands tall in the pocket, and rapidly reads through his progressions making both quick and correct decisions. One thing which may explain this is the fact Baldwin carries a 3.5 grade point average scholastically.

Baldwin‘s heady, play-making, ability shows up one additional place too, and that is on defense. As a freshman last year in the defensive backfield, the heady playmaker recovered a fumble and picked three passes, taking one to the house, interspersed among his 25 tackles. He also had 67 interception return yards demonstrating an elusiveness and mobility which is useful in an offensive backfield. Can Isiah Baker, a 2019 kid at a position for which his skill-set seems ill-suited hold off the hard charging, Class of 2021, QB prospect Nick Baldwin in 2018? If you are a Generals football fan, do you really want him too?