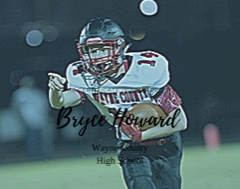 Coach Shawn Thompson had a really good district 6 team a year ago in Kentucky’s 4A classification. Of course, Wayne County ended the year with the best record in the classification, bar none. I mean, Wayne County finished the 2017 season 12-2, tying both Johnson Central and Franklin-Simpson for the head of the class with 12 wins each. Unlike both Franklin-Simpson and Johnson Central, the Cardinals lost just 2, and not 3, games on the year. Here’s a reader’s tip…if your high school team in Kentucky plays 14 games, something went right. Last year’s success was foreseeable as Wayne County was having both tremendous success, and unbeaten seasons, playing junior varsity and freshman football. Those freshmen and sophomores, eventually, become juniors and seniors.

Class of 2019‘s Bryce Howard was listed on the roster in 2017 at receiver and in the defensive backfield (corner). Being honest here, he really didn’t get a lot of run at receiver as he only caught 4 passes for 36 yards and a touchdown. To the casual observer, the situation looks pretty bleak at QB for 2018 as Brody Weaver and Riley Woods completed one pass a piece on the year for a combined 8 yards. KPGFootball isn’t the casual observer. You see, we know that Bryce Howard, who is 6-0 tall and whose weight doesn’t appear on any present roster (we are pretty sure Bryce is somewhat slighter than Lorenzo Linsey and his 212 pounds of positional heft) quarterbacked Wayne County‘s JV football team to a conference championship and an 8-0 record. Couple his JV success with the lack of experience of both Weaver and Woods, and KPGFootball believes Howard is headed to QB for 2018, unless the Cardinals bring someone else in to play there. Should Howard be moved to QB, he still has Aubrey Weaver to target down the field as Weaver is also a 2019 prospect who, in 2017, caught 64 passes for 1,016 yards and 12 TDs to lead the team in two of those three statistical categories.

On defense, Bryce Howard was a stone, cold stud in Coach Thompson‘s back-four in 2017. Howard intercepted 6 passes to be among the leaders in Kentucky high school football a year ago, and returned one of the interceptions to the house for a pick-six. Howard recovered a fumble and registered 66 tackles, 48 of which were solos for a defense which held opponents to 18.4 points per game over the 14 games it was privileged to play. So, here’s the rub; the following are the questions about which inquiring minds in Kentucky football circles want to know…Did Wayne County lose a lot? Yes, without a question. Will they be as good as last year?  No, at KPGFootball, we can’t imagine a scenario where they will. Will they still be a good football team? Yes, with players around like Bryce Howard and Aubrey Weaver, they certainly will be. This will be fun to monitor, going forward, to see how either right or wrong we were.