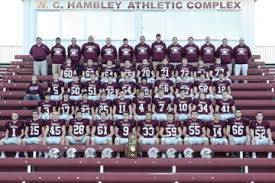 Pikeville will host, for its last regular season game, the Rebels from Fort Gay, WV just off of highway 52 near Glanhayes. As you can well imagine, these boys are pretty tough, especially in light of how kids can be cruel and you know their hailing from Fort Gay, West Virginia has resulted in more than a few unkind barbs being tossed its way on football fields throughout West Virginia. Interestingly enough, the mascot of Tolsia High School is Rebels, which judging by its official insignia would lead one to believe it to be a reference to the War Between the States or the Civil War.  Why KPGFootball finds that interesting is because West Virginia was formed owing to its not desiring to secede from the Union, simultaneous with Virginia’s secession, during the actual conflict. West Virginia could have been Rebels but opted to remain Yankees. Oh well, nothing to do with football but interesting none the less. Last week we picked the Panthers to beat the Golden Wave from Grundy, Virginia, 47-6. The actual score form the game ended 47-8. We will see if we can’t duplicated that type of accuracy again this week in our forecast. That is now three consecutive weeks Hail Pikeville’s forecast has been close to right on the money. Like we do every week, we are going to attempt to break down the match-up with Tolsia by looking both back at the Grundy game and then forward at Tolsia. At the end of this article, we will give you our call as to how we see this game resolving.

Really don’t know how the Panthers could have been any more efficient offensively against the Golden Wave. I mean the QB was an efficient 7 for 9 for 137 yards and 2 TDs against zero interceptions and that is the stat-line of the freshman QB, Isaac McNamee, who was playing mop-up. Of course, McNamee is not a normal, freshman QB. Isaac is KPGFootball’s top rated signal-caller in Kentucky’s Class of 2022. By this point, if KPGFootball hasn’t convinced Pikeville we know Kentucky High School Football, then I don’t believe Pikeville High School will ever be convinced. So, what did the starter do against the Golden Wave? We are glad you asked. Connor Roberts was a perfect 4 for 4 passing for 255 yards with all four completions being for scores. Roberts, like McNamee, wasn’t intercepted. In addition to a Roberts leading the Panthers in passing, a Roberts led the team’s rushing output on the evening. Zack Roberts rushed the ball only 6 times, gaining 83 yards.

As for catching the football, the receivers were led by Jackson Hensley’s 3 receptions for 169 receiving yards and 3 TD receptions. Kyle Watkins collected 2 receptions for 75 receiving yards and one TD and Seth Pugh only caught one pass all night long; but, man, did he make sure his one reception meant something. Pugh’s one reception covered 70 yards and went for a score. Now, we are getting down to the nitty-gritty, the playoff run. Teams which win Championships, as Pikeville’s Coach Chris McNamee knows well, have to be good at all facets of the game. The smallest appearing thing can get you beat this time of year. People tend to overlook field-goals and point-after-trys (PATs) until the team attempting to knot the score, in a tight game, misses. In the playoffs those misses too often equate to losses. That just happened this past week-end when Lexington Christian, a team we beat 50-7 earlier in the year, played Danville, last year’s Class 2A Football State Champion, at Danville. Danville scored late to tighten the game at 14-13 at the end of regulation only to miss the PAT and lose the game 14-13. That is why, with our own play-off run looming, KPGFootball wants to mention that Tanner Hamilton was 5 for 5 Friday night in Grundy, Virginia on his PATs. Store away that information and know that PATs, on the way to winning football championships, become more and more meaningful as a team moves along its path to glory.

As for defense, it performed exceedingly well. In fact, holding Grundy to 8 points on the night, notwithstanding the fact its backfield boasted a player the caliber of Gabe Fiser, who entered the game with Pikeville having already gained around 1,300 yards on the year and rushing for 16 TDs, constituted a job well done. What else the Panthers did very well was get the Golden Wave behind the sticks by making tackles behind the line of scrimmage. As for which culprits made tackles for loss, it was the usual suspects (if you will). The defense’s TFL statistic on the night was led by Jon Collum, who contributed three such hits, and linebacker Connor Wright, who has shown himself particularly adept at making plays in an offenses’ backfield. Connor Wright contributed two of the defense’s 8 total TFLs. Christian Billiter picked a pass and returned it 42 yards and Seth Pugh picked a pass and returned it 14, capping off a performance by the Panther team every bit as dominant as the final score would belie.

As we look ahead at the Tolsia Rebels, it is pretty easy to see what they like to do offensively. Tolsia relies on the running of Devon Crum who likes to find big number 75, Brent Setser, and ride that particular bus to pay dirt. Crum has had many productive games on the year, perhaps the biggest of which was his 200 yard and 5 rushing TD effort back in September against the Buffalo Bison. In a year where the Panthers have faced many fine linemen, particularly up in the Mountains where an shortage of big-uglies never seems to be a problem, Pikeville will see one of the bigger and most athletic offensive tackles on the season in Setser.

Brent Setser is a multi-level blocking machine who rolls through first level defenders collecting additional defenders as he continues to block into the 2nd and 3rd levels until the whistle blows. Setser is listed at 6-4 and weighs 290 pounds. Don’t worry, you will have no trouble figuring out which lineman is Setser, and it won’t just be his size which gives away the secret. Setser has been timed at 5.4 seconds in the 40 yard dash and boasts both a 21 inch vertical and an 82 inch broad jump. Many coaches and scouts believe running and jumping to be physical traits comprising the sine qua non (which in latin roughly translates, the essential, crucial, or indispensable ingredient) of athleticism. A 290 pound offensive lineman who has length (6’4″), runs a 5.4 second 40, and can vertical 21 inches while broad jumping 6’10” would qualify as a next-level athlete at either the Tackle or Guard position. Coaches really prize multi-sport athletes and Setser competes in Track and Field, in addition to football. Setser threw the shot put 40 feet and one-half inch at the WVSSAC Region 4-1A Championships last year and slung the discus 83’5″ at the Paul Wood Invitational. Setser is a 350 pound bench-presser and squats 480 pounds.

Looking over the course of Tolsia’s schedule to date, they haven’t played anyone as good as this Pikeville team. Really, no one on the schedule is even close. For instance, Pikeville has been determined by the MaxPreps.com computer algorithm, to be the 2,336th best team in America. Tolsia has traveled to Ohio this year to play Fairland High School, a team MaxPreps.com believes to be the 5,754th best team in America, and lost 42-0. The leading publication covering the high school game across America has a computer program which believes Pikeville to be significantly better than the team in Ohio which beat Tolsia 42-0 at its place earlier in the year. Looking at it from the other perspective, that of the Panthers, Tolsia is ranked number number 11,579th in the Country. The last time Pikeville played a team, at home with a similar ranking, it played the Phelps Hornets. Phelps is ranked by the same computer which ranked Tolsia, the 11,882nd best team in the Country playing high school football. Pikeville beat Phelps at home 47-0. We believe the crystal ball is telling us this game will be similar in outcome to the Phelps score. We like the Panthers to move to 7-2 entering the playoffs and Tolsia to drop to 4-5.

Join us as we enter the KHSAA playoff trek toward another Panther State Football Championship as we look back at this game and preview the Panther’s first round match-up. Oh yeah, give us a follow on Twitter @KPGFootball and subscribe to the on-line magazine by going to www.kentuckyprepgridiron.com and follow the prompts. Until next week, Panthers, this is Fletcher Long, reporting for KPGFootball, reminding all of the ballers out there to PLAY THROUGH THE WHISTLE.