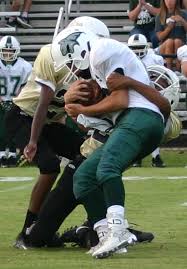 For those having to play the Large Division County Champion, Greenbrier Bobcats’ middle school football team this past season, they had to have left the match-up impressed with how at home Braxton Laney, Class of 2023 and Bret Cooper All-American QB, looked running Greenbrier’s attack. Laney, for his efforts was awarded the MVP Award for Robertson County giving credit to his dedicated coaches and teammates.  Braxton, a pass/option quarterback, finished the season with 1185 yards on offense, scoring 22 touchdowns, and racking up 12 two point conversions. 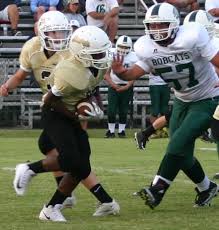 This was Braxton’s first year playing QB, as he sat out the two previous years after being diagnosed with Type I Diabetes. He didn’t play like someone who had a life-threatening disease. Laney completed 41 of 59 passes for 642 yards and gained another 543 yards running the football. Braxton registered a 95 yard, pick six, and a tackle for a safety. Defensively, he contributed 47 total stops, 17 of those by way of solo. The post-season accolades cascaded down like a crystal waterfall after his splendid season as Laney was selected both All-County and to the prestigious Bret Cooper Junior All-American. For the latter, Laney played in the annual game in Dallas, TX in December of 2017. Laney has recently tried out for the Tennessee Future Stars team which will be announced sometime in May.

Congratulations to Class of 2023 Braxton Laney from Greenbrier Middle School for being selected this week’s Stewart Williams Furniture Company’s Robertson County Player of the Week. Reporting for KPGFootball, this is Fletcher Long reminding all of you ballers out there to PLAY THROUGH THE WHISTLE.