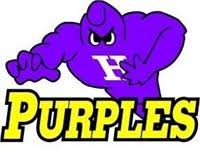 Bridger Knee, at first glance, isn’t going to knock you down with his size. Sure, he is good sized for the positions he is prognosticated to play by conventional middle school standards, but Bridger Knee is undersized by the standards at which his position groups are judged on a State or National middle school level. What we at KPGFootball like about Bridger is he only has good weight to add and no bad weight to lose.  Bridger Knee, who plays End on defense and Guard on offense, has a slender build on a frame with some length and quite a bit of growing still to do. With a solid offseason, this young baller could put on 20 pounds of muscle easily and come into the Fall at 215 plus while increasing his speed and quick-twitch burst. It is obvious Bridger has been well coached and transitions, both in and out of his stance, well, firing off with good leverage and quick get-off. Knee tried out for the Kentucky Future Stars in Glasgow, Kentucky where he showed the mobility and ability to give the selectors plenty to consider about his candidacy to be included on the roster this summer.

Anyway, congratulations to Bridger Knee for his Revolutionary Play which has earned him this week’s recognition from the fastest growing bank in the Commonwealth of Kentucky…your friends at Independence Bank.