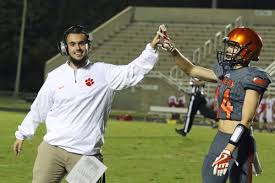 It would appear to me there are abundant indications the HHS football program is getting serious about its football all through its various levels. The Tigers are preseason selections at the top of class 4A by numerous prognosticators and have brought in a new freshman staff which will insure the pipeline of talent flowing into the varsity program remains both unclogged and productive. Hopkinsville High School is the twelfth winningest program in Kentucky history and a 3X, State Football Champion, with one title coming in 1940 before the KHSAA was formed and the other two in 1965 and 1966. Hopkinsville High School has played for the title three other times, 1984, 1996, and 1997. Last year, the Tigers advanced to the Regional Finals (State Quarter-finals) before bowing out to the eventual 4A State Champion (Franklin-Simpson) after taking the lead into the half.

The reigns of the freshman program have been handed to Jacob Ezell, who also assists the varsity team as an offensive line coach and is only 22 years old, making him among the youngest head coaches at the high school level anywhere in Kentucky. Ezell played his football at HHS before playing in college at Campbellsville. Ezell has been described by players he has before coached as being a down to earth guy who is tough but someone his charges never have reason to doubt is interested only in each player’s best development. In Ezell’s first year heading up the offensive line for HHS, he had three players earn post-season honors as Blake Schutt earned all-WKC, Seth Henderson was All-KNE, and William Long was awarded AFI-KPG Freshman All-State honors for his play up front.

Ezell will not be without quality assistance either as Hopkinsville High School has called up two coaches from the middle school who led the 2016 HMS Tigers to a 12-1 finish, a Region I Championship, and a narrow 38-36 defeat to State Champion TK Stone in the State Semi-finals. In talking with Coach Ezell he indicated to KPGFootball Maurice Jesse, formerly head coach at HMS, will be coordinating his offense while Carl Banks will assume the same duties for the 9th grade he did for HMS in coordinating the defense. In talking with Coach Ezell preparing to publish this article, KPGFootball learned that Ezell is very excited about this opportunity and coaching with two assistants who have had tremendous success at the middle school level. KPGFootball would point out, that in two years under Jesse as head coach, HMS won 17 of the 20 games it played, including the 2016, Region I, Championship; the program’s only Regional Championship in its history.

The roster will be hardly deplete of talent as the HHS roster is sufficiently loaded with experienced players permitting more of the incoming freshmen to get some seasoning before being thrown into varsity fire. Coach Ezell will boast two members of the prestigious Team Kentucky on his roster in QB, TreyVon Jefferson, 6-4, 165 pounds, and big offensive guard, William Hughes, 5-10, 260 pounds. William Hughes was also selected to the Bret Cooper Junior All-American Football Team and played for the East squad in Dallas, Texas this past December. Coach Ezell served, in 2016, as an offensive line coach at the All-American game himself. While both Jefferson and Hughes are listed on the varsity roster, the only two freshman so listed at present, it is not expected either freshman will be heavily relied on at that level anywhere near the extent EJ Austin and William Long were forced into action last season. Also pitching in for the upcoming frosh will be Andrew Ludy, Jayden Dillard, and DreShawn Richards. Now, Dillard was one of the leading rushers in Western Kentucky last year inspite of being injured for slightly more than half the year. Andrew Ludy and DreShawn Richards are both incredible athletes with burning speed who will become football stars when their commitment levels to football equal their athleticism.

This is a superb staff put together by Coach Ezell and one which will have the personnel and the experience at both coordinator positions to have a tremendous level of success. Congratulations to Jacob Ezell from your friends at KPGFootball.