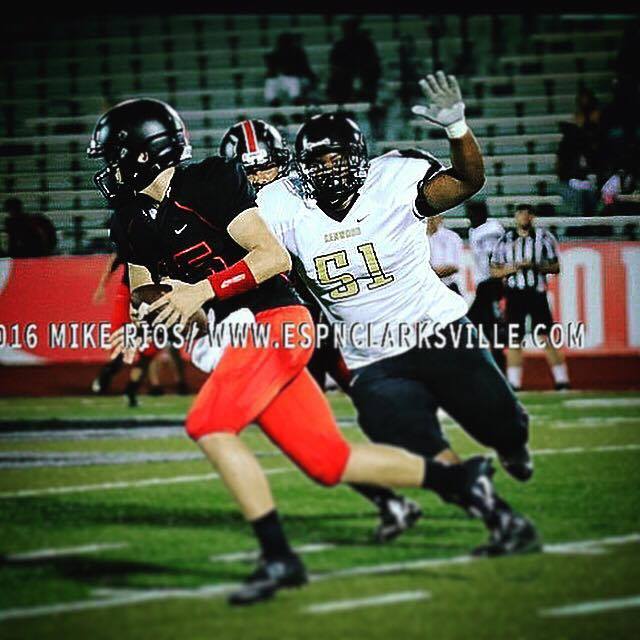 Demarrio Borum is a diesel truck.  In fact that ought to be his nickname.  He is built low to the ground making him able to maintain a low center and appropriate pad level and he has been hand timed in the 40 yard dash at 5 seconds flat, which at his 304 pound heft is moving at a lethal pace.  The kid is strong as a bull too, boasting a 355 pound bench press, a squat exceeding 400 pounds, and a power clean of 250.  Being completely honest, you really expect a kid pressing 355 to have a higher squat and power clean so, obviously, he has been spending too much time in the weight program on his upper body but still impressive strength levels for a sophomore, rising junior and his running speed is clearly elite.

On the topic of citizenship, he is a “yessir, no-sir” kid who has, obviously, been well reared by his mother and who ever else has contributed to a young man who presented to me over the phone as politely as any young man with whom I have ever had the pleasure of speaking.  Demarrio is sporting a small college offer but plays Center on offense, a position where there is always a lot of need.  One would have to think it shouldn’t be hard to sell a Division I school in either FBS or FCS that it could use a 6’0, 304 pound Center who benches in the high threes or even low 400’s (which should be easily attainable by 2019) and runs a 5 flat 40 and is a yessir, no-sir kid.  I mean, for Pete’s sake!

Anyway, Kentucky Prep Gridiron has no problem touting Marrio as the most intriguing OL/DL prospect in the 2019 Class in The Queen City.  Remember ballers…PLAY THROUGH THE WHISTLE!