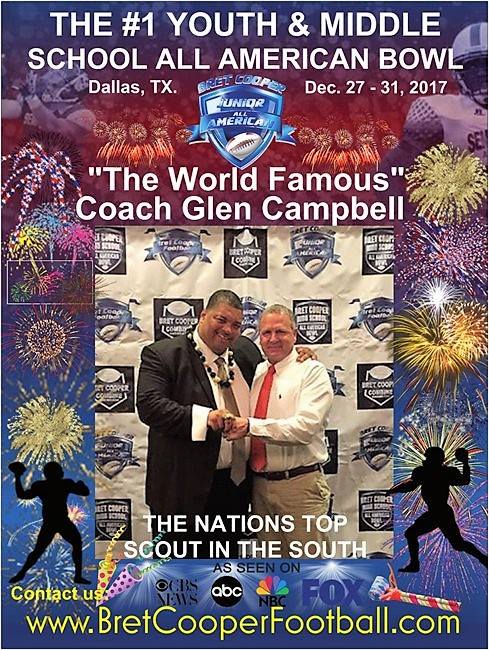 Well, it is day one and I am having a great time already. If you love football, this is a football junky’s trip to paradise. From the coaches to the players, it is really a good time. If you aren’t a football junky, it may not be too nice but, c’est la vie. First of all, as someone coaching the offensive line, Coach Bish and I couldn’t be more excited about the players we will get to coach this week. They are big, look to move well, and are put together the way you would want them to be put together. Huge shout out to Tennessee Future Stars Director Josh Jones who sent over about six players from the Knoxville Fulton Football program. For the uninformed, they play a little football at Knoxville Fulton, just so you know.

William Hughes, from Hopkinsville Middle School in Hopkinsville, Kentucky, is here and looks like he has put in quite a bit of offseason work to get himself physically prepared for this game. One thing is for sure, with what the East has on the roster, if Hughes can hang and bang with these boys, he has a bright future at HHS playing for Coach Clayton. Malachi Harrison is here and ready to play and that is good news for the East. Harrison is fresh off a MVP defensive performance in this past summer’s Tennessee-Kentucky Future Stars Classic which was played in Clarksville, Tennessee. This summer he was listed as 5’11” 193 pounds, but he is both taller and heavier than that now. He has impressive length and bend and terrorized the Kentucky Team in the Futue Stars Game, snap after snap.

Evan Kelley, who is listed among the four quarterbacks on the roster, is here and looks to play OLB/DE in the East squad’s 3-4 hybrid 5-2 scheme. On offense, Evan has the flexibility to play both QB and the TE-Y backfield, H-back, type player in Coach Campbell’s spread offense. Kelley, who has a linebacker’s mentality, can attack edge defenders in the outside run game and makes a nice target with his 6’1″ frame and long arms in the passing game. As for running backs, there is a player from Florida who reports an 11.2, laser timed, 100 meter. That is moving folks.

I will continue to report as the week progresses. Until the next report from here in Dallas, remember to PLAY THROUGH THE WHISTLE!