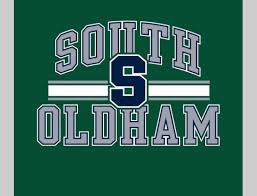 Mason Bowman is a good example of why so many really fine football players in Kentucky get over-looked. If you search him under Hudl, you will find he has a page with no videos loaded. If you look him up under MaxPreps, he is listed on the roster but no other information related to height, weight, or anything else, for that matter, appears. He is @masonbowman44 on Twitter and he barely even has a picture of himself on the page. When I get to his on-field production in a moment, in 2017, you will really see why everything above listed is worthy of mild, but well-intended, chastisement. He’s a Class of 2019 kid and could have been considered for All-State inclusion on our All-State team from last year, but information about him was too hard by which to come.

First of all, what is the big mystery about his frame. Why isn’t there a height and weight for him listed anywhere on line. He’s number 44 in the picture to the left of this paragraph and you will see him standing to the right of the frame, beside Tanner Goodlett, C/DT, Class of 2018. We know (or think we know) that Tanner Goodlett is 6-0, and weighs approximately 275. Now, one might have to blow up the picture to see this, but Mason can’t be more than maybe an inch shorter than Goodlett and, while not as thick, he is somewhere in the ball park, thickness wise. By use of deductive reasoning, which was the Remainderman left to KPGFootball by the various statisticians across the Commonwealth, I would deduce (assuming Goodlett’s dimensions are accurate) that Bowman is in the neighborhood of 5-10 to 5-11, and weighs somewhere between 220-240 pounds. Bowman lists MLB as one of his primary positions. There have been plenty of fantastic MLBs with those dimensions. There is nothing on the internet informing us the first thing about any of his speed, spacial quickness, or power numbers.

Now, here’s why this is all odd. By virtue of his on-field production from a season ago, it would appear Mason Bowman is a very fine middle linebacker and a weapon for the offense in the run game at TE. On defense, where the picture isn’t nearly as murky as the offensive side of the ball for Bowman, Mason led the Dragon Defense in tackles with 79, solo tackles with 55, recovered fumbles with two (tied), and interceptions with two (tied). In four critical defensive statistical areas (tackles, solo tackles, fumble recoveries, and interceptions), Bowman was either the head Dragon, or tied at the top for the Dragon‘s, defensively.  Again, by use of deductive reasoning, if he is running around the field making all these plays, how slow can he possibly be? Therefore, chances are he is both quick and fast.

On the offensive side of the ball, piece-milling his exact effectiveness as a TE is a little more difficult. Here’s what we do know. Number one, it doesn’t appear South, who only completed 70 passes on the year, or about 6 (5.833333…) per game over 12 games, threw it to the TE much, if any. While Mason Bowman didn’t catch a single pass, the Dragons did carry the ball last year 364 times, gaining 3413 yards (30 or so times a night), scoring 44 rushing TDs. The Dragons, as a team, gained 9.376 or so yards every time anyone carried the football on its way to scoring 457 points or a smidge over 38 points a game. Assuming the Dragons run somewhere other than between guard and center 364 times last season, one would have to assume Bowman is a lethal aspect of the upfront, run-blocking design.

As a final point, all of the data KPGFootball dug around suggests Mason Bowman is a very fine middle linebacker and also a Dragon of a blocker along the edge of the offensive line, the same offensive line which performed very well a season ago. This information is now of record in this very digital magazine for recruiters to log on and read. The statistical analysis is done for them, making their job as easy as reading an article. Mason Bowman is a college prospect at MLB, with the frame offensively to play fullback in an I-formation and play a blocking H-Back in an aggressive Spread attack. It took too muck digging to find this information and, while KPGFootball is happy to do it, it’s asking too much of a college recruiter. Recruiters don’t need to find hidden gems, when they can just go to the jewelry store and shop there. Here’s your online jewelry store right here, buddy. Better think about that!