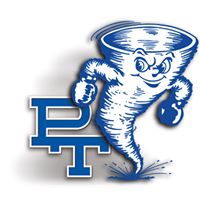 I am from an area of Kentucky where The Blue Tornado is all one has to say. We know who that is, it is Paducah Tilghman. If any of you are the least bit suspicious about either the history or tradition of The Blue Tornado then I have linked you to an article I published June 30, 2017, entitled Tornado Warning, for your edification. Steve Duncan just completed his first year at the helm and The Blue Tornado finished 5-7 on the year, losing in the 2nd round to E-Town High School, 41-0. However, there is much about which to be excited if one is a fan of The Blue Tornado going forward. Last season, according to the statistics on the KHSAA website, Paducah Tilghman rushed for 3,300 yards while only allowing 136 in 12 games, The Blue Tornado may have only passed for 487 yards itself but allowed only 63 yards. I can promise you this…The Blue Tornado still looks quite formidable getting off a bus. Maybe none of them more so than rising senior, Colbe Crim.

Colbe is a two-sport star who is committed to play baseball at the college level at Eastern Illinois University. Why not? I mean, in baseball, he has an ERA of 2.01, won 8 games this past year, struck out 66 batters, and, in the field, sported a fielding percentage of .985. I definitely would call that a right fine college baseball prospect but I don’t cover baseball. The 6-0, 200 pound MLB, SS prospect is right good at football too. Last year for Paducah Tilghman, Crim registered 98 tackles, 72 of which were solos, while, from his running back position on offense, gaining 171 yards on 32 carries for 5.34 yards or so every time he touched the football. Now two of Paducah Tilghman‘s leading rushers in Michael Barnes (637 yards) an Jordan Harmon (742 yards) have graduated so I would expect this season for Crim’s chances to demonstrate what he can do running the football will increase exponentially. The Blue Tornado do return last year’s leading rusher in Class of 2019 Makel Askew (925 yards).

If history teaches us anything, and truly repeats itself as George Santayana, the famous writer and philosopher once claimed, then people should not sleep on Paducah Tilghman in coming seasons. The Blue Tornado, much like Ft. Thomas Highlands, won’t be asleep forever and when they finally do get awakened, opponents may find themselves in for quite a storm.