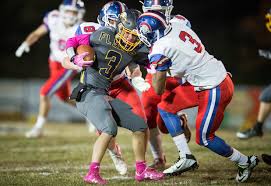 As we continue to feature prominent match-ups occurring in week zero across the Commonwealth of Kentucky, and as we march toward the 2018 season opener; today, we have the 2016, Class 2A, State Football Champion and 2017 semi-finalist, Christian Academy of Louisville, preseason ranked No. 2 in most Class 2A, pre-season rankings versus a team which lost to Covington Catholic in the Regional Final in Class 5A, a year ago, but who went 10-2 and enters this season ranked No. 4 in the Courier-Journal’s coach’s poll in South Oldham High School. Both teams are highly regarded in their respective classifications, and one of them being from a higher classification is meaningless. As we have before discussed, the elite football teams, at any classification, have shown an ability to play football against any level of competition throughout the Commonwealth. The game will be played in Crestwood, Kentucky. Here’s a break down of that match-up and, at the end, the KPGFootball opinion as to whom will win Friday night!

For the visiting Centurions…

The Centurions are one of those teams which transcend its classification. What we mean by that is the fact CAL is Class 2A is meaningless and teams from high classifications having to play them can take no comfort, whatsoever, from that fact. They can play with any team in Kentucky, just like Class 2A, Danville, Mayfield, and St. Francis DeSales. Last year, the Centurions beat a 10-2, 5A, South Oldham team, to open its 2017 season, 28-14; beat a Class 6A, District 2, State semi-finalist, Central Hardin, 15-0; and beat Class 3A, Semi-finalist, Elizabethtown High School, 24-9. We rest our case! The Centurions boast one of Kentucky’s, preseason, Mr. Football favorites and a player regarded as Kentucky’s third highest rated prospect in the Class of 2019. His name is Milton Wright, perhaps you have heard of him? Wright is a composite 4 star prospect, the 196th best football player in his class, nationwide, and the 14th highest regarded athlete in the country. The 6-3 and 200 pound, WR, demonstrated his versatility and value for the Centurions a year ago in gaining 346 yards rushing on only 61 attempts with 8 rushing TDs, catching 34 passes for 685 yards receiving with 9 TD receiving, housing a couple kicks, scoring a two-point conversion, and accounting for 110 of the team’s 398 points scored on the year. On defense, Wright intercepted 4 passes and collected 40 tackles.

Also back for the Centurions, in 2018, is leading rusher Brandt Babin, who is a returning All-Stater as he was selected to our freshman All-State football team in 2017. Babin gained 736 yards from scrimmage in 125 carries, scoring 11 rushing TDs, contributing 35 tackles defensively in one of the most productive freshman years one can imagine as a two-way player on a team which narrowly missed repeating its 2016 State Football Championship when it lost in Mayfield, Kentucky during the semis. Brandt’s twin brother, Braeden, is both Brandt’s lead blocker, at the FB slot in the Centurion offense, and a defensive lineman, from a year ago, who also made the freshman, All-State football team. Brandt has been listed, in some pre-season rankings, as a top 20 defensive lineman for 2018 regardless of graduation year. The Centurion defense lost it leading tackler from to graduation in Nicholas Olsofka but return a pair of top performers in Jack Payne and Braden Hafling. Last year was a re-loading year for the Centurions and they still managed an 11-3 work sheet. Not really good news for the 2018 scheduled opponents.

Obviously, if you have a freshman running back who can perform at the level of Brandt Babin, though tender in years, then surely you  have some linemen upfront, right? I mean, Babin isn’t just running over people with the only blocking being his brother at FB. Well, CAL has another player whom we have ranked the No. 1 player, Commonwealth-wide, in the Class of 2020, in junior tackle John Young. Young is 6-6 and weighs in the neighborhood of 290 pounds with the mobility and nastiness to both finish, at the defense’s first level, and slide off to second and third level defenders where he can, additionally, finish them off in open space. He has college’s drooling too as several FBS level schools have already offered.

For the home-standing Dragons…

There are people out there who still believe this team is a year away. I am not so sure they haven’t already arrived. The Dragons from South Oldham consistently win 11 to 12 games a year under HC Jamie Reed. Sure the Dragons lost three year starting quarterback, Drew Zaubi, to graduation, but they run the ball 75% of the time anyway, in its Wing T attack, so who cares? They need a ball handler/game manager more so than a passer and they are sure to have one of those on the roster somewhere. Aside from QB, where the need is for more of a game manager than a game changer, the cupboard is hardly barren. The Dragons return an impressive core of playmakers on offense, especially at RB.

It is quintessential to run the football. In High School football, that may be particularly true. You may have noticed that teams returning stud running backs tend to fair well in both pre and in-season polls. A stud running back hides a lot of ailments in football at the high school level. Well, the Dragons return AFI-KPG Sophomore All-State RB, Keaton Martin. Martin amassed 1,558 yards rushing as a freshman and followed that up with 1,258 rushing yards last season. As before discussed, South Oldham’s Wing-T runs the ball 75% of the time, which is why I predict this team will overcome losing a three year starter at QB.  If they can find a game manager/ball handler for the quarterback position, and if Martin continues on his present pace, we may be talking about an all-time Kentucky rushing record before he leaves.

It’s not like there aren’t any targets for throwing the ball should the offense elect. The Dragons have returning All-State receiver (made our sophomore All-State football team) Ethan Benarczyk to stretch the field for them. During his sophomore season, Ethan led South Oldham in receptions, TDs receiving, and yards per catch at 25, and at 5-10 and 180 pounds, Ethan plays and looks similar to a Wes Welker/Julian Edelman type. The Dragons also boast one of the best pure athletes in his class in AFI-KPG Sophomore All-Stater JT Benson. Benson never comes off the field for the Dragons whether it is offense, defense, or special teams. JT has committed to play baseball in college for Dan McDonnell’s, Top-5 rated, program at the University of Louisville. Also at the slot the Dragons return Colton Bowlden, who doubles on defense at LB, and who, last year, gained 619 yards rushing, averaging 16 yards per carry.

On defense, the Dragons return at LB both Bowlden and Mason Bowman who lead the defense in tackles last year with 79 stops. Now, the Dragons have more players playing on both sides of the ball than a lot of people prefer in Class 5A, but assuming the two-way players are as in shape, as they have been the last few years, they should make it work as they have always done.

This much I know, South Oldham will win Class 5A, District 3 for the 7th consecutive time. In the back of your mind you also have to remember they had a middle school team which played for the State Championship, at that level, in 2015, who should be coming into their own now, if ever. What I am trying to tell you is, this might be South Oldham’s year, and if not this year, then certainly next.

The Dragons have to get K-Mart unleashed. Keaton Martin, K-Mart, has to be effective running the ball against the Centurion defensive front. It will be critical for the Dragon O-Line to find some creases through which Martin can explode into the second level to limit the amount of possessions the Centurions get on offense and the amount of times they can get the ball into the hands of either Wright or Babin. It will also be crucial for South Oldham to show it can get the ball to Bednarczyk down the field to dissuade the Centurions from just loading up the box defensively. Another important matchup will be finding a way to contain Milton Wright, and, more particularly, how many defenders will the Dragons have to assign to that one player in order to accomplish that defensive goal? Wright is an athlete unlike anything they have ever had on the roster in Crestwood, Kentucky (or most places throughout Kentucky, if we are bing honest) and the Dragon defense just can’t afford, with the Centurion weaponry at its disposal in other positions, to have to assign the bulk of its defense to stopping just one player. The Centurions have to get Brandt Babin loose agains the tough Dragon front and into the second and third levels which will create opportunities for Wright in the vertical passing game.

Look for the visiting Centurions to challenge Mayfield for the Class 2A crown in 2018. The top of Class 2A in Kentucky football can play with any and everyone. South Oldham has been stockpiling talent down there and are loaded in both its 2020 and 2021 classes. This talent may need to be Seniors and Juniors as opposed to Juniors and Sophomores to get past CAL in Crestwood, or any other place. We like the boys from 2A in this one, but it should be close than last year in Louisville.