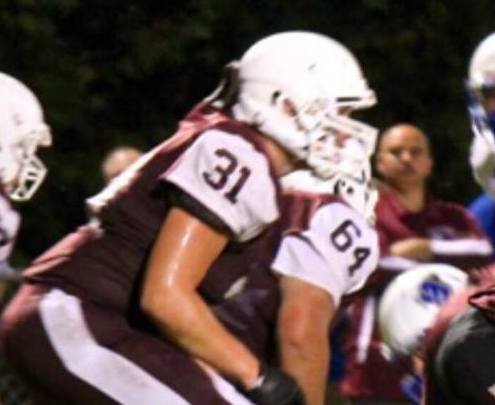 We, at KPGFootball have been effusive in our praise of both Ricco Hughes, as the Director of Kentucky Future Stars’ Football, and his ability to correctly identify middle school players who are destined to be stars at the high school level and beyond. There exists scant instances where he has been shown wrong, outside of injury derailing a young man’s ability to continue playing. We have before written about how right Director Hughes was in his assessment of Leslie County’s Preston Spurlock.

Preston Spurlock has transitioned well from a Future Star to being a present, high school football star, just as both Ricco Hughes and we forecasted. Last year, KPGFootball selected Preston to our Freshman All-State Football Team at linebacker. Preston is playing substantially thicker than the 190 pound freshman who started for Leslie County at linebacker a year ago as only a freshman. What has also gotten heftier, and even more game altering, has been his on-field production in spite of his being the focus of scouting reports for every opponent on the schedule. In fact, he has proven himself a man among boys for Leslie County in 2018.

Preston, who is still 5-10, has gained 25 pounds of good weight and is playing at 215 pounds of solid iron this season as a sophomore. This has been very bad news for opposing ball carriers as he was killing people when he weighed just 190 pounds. We thought it would be fun to include a little video of Preston screaming through the line of scrimmage to completely WWF a ball carrier at the point of attack. Watch this…

Now, many parents get frustrated because there are coaches whom think it unimportant to keep current statistics for their players on the KHSAA database. We have before voiced our frustration with this as it is the database we consult in selecting All-State teams at the end of the year. Luckily for Preston, KPGFootball has known about this kid since he played on Team Kentucky in 7th grade back in 2015. That being said, KPGFootball isn’t reliant on his high school coaching staff for the compilation of his statistics. For instance, we know (independently from anything posted on the KHSAA website) that Spurlock, so far this season, has 84 tackles and has caused 3 fumbles on the year. We know he is among the leaders in Kentucky’s 4A Classification in tackles. We know he has been a big hit machine this season routinely coming into the line and collision-ing ball-carriers with such extreme violence it results in film which tends to make one wince. We also know Preston Spurlock will have a place to play on Saturdays in the very near future, as making the trip to Leslie County to see him play is well worth the trip.

In summation, we believe Preston Spurlock is a high school linebacker whose strength, power, explosion, and football IQ make him one to watch, at his position, going forward. We would additionally note he still has two more full years to develop after this season. We would also be willing to wager KPGFootball is more thrilled about the prospect of his continued development than the ball handlers around the 8th district of the 2A classification, that’s for sure.